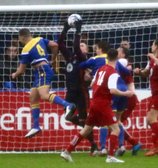 Promotion candidates Bootle prove too strong for Gate on a tough afternoon for Luke Evans’ men.

Following Tuesday’s emphatic 4-2 win over 1874 Northwich, Luke Evans named an unchanged line up for the tough trip to Bootle FC, although Josh Pollard was able to return to the bench.

Kieran Feeney, who opened his account for the club on Tuesday, had the first shot of the game inside the first minute, cutting inside from the left hand side and firing a low shot that was well held by the goalkeeper.

Despite Gate’s positive start, it was the hosts who took the lead on four minutes. Bootle skipper Carl Peers drove at the Gate defence and his shot deflected fortuitously past the helpless Jordan Gidley.

Bootle grabbed a second 10 minutes later. The hosts won the ball back in the final third and the ball was played through to Ben Hodkinson who finished clinically past Gidley. Hodkinson then went close to another, curling over after cutting inside from the left hand side.

Gate looked to bounce back, with Dean Ing heading over a free kick from James Boyd from close range. Elliot Pond then fired over from the edge of the box on 35 minutes after doing well to find space for the shot.

Gate continued to push for the rest of the half but the hosts managed the next 10 minutes well to go into the break comfortably ahead.

Looking for a route back into the game, Evans replaced Dec Baldwin with the returning Josh Pollard at the break to bring a more attacking threat from midfield.

However it was a nightmare start to the half for Gate, conceding a further two goals in just three minutes.

Firstly, Connor Millington produced a powerful strike on distance inside the first minute of the half, once again giving Gidley no chance in the Gate net. Jack McGowan scored Bootle’s next goal two minutes later. A through ball split apart the Gate defence and McGowan finished the move, another excellent finish from a clinical Bootle side.

Gate nearly hit straight back as substitute Josh Pollard struck narrowly wide from the e edge of the box.

But the hosts soon grabbed another, Connor Millington netting his second with an even better strike on 53 minutes. A free kick from distance was layed off for Millington who found the top corner superbly.

Following a formation change and another two changes from Gate, with Jamie Ramwell and Andy Haworth coming on in place of Sam Staunton-Turner and Jacob Ridings, Evans’ side got a consolation goal through James Boyd on 57 minutes. The attacking midfielder found half a yard on the edge of the box and found the bottom corner with a powerful shot to pull it back to 5-1.

10 minutes later, a superb stop from Gidley denied Tom Peterson from close range. However Peterson made up for his missed chance less than a minute later. Gate failed to fully clear their lines after Gidley’s save and Peterson found space in the area, finishing smartly past Gidley.

Bootle got another goal on 75 minutes. A misplaced pass from Pollard gave the ball away to the hosts. Hodkinson got in behind the Gate defence and rounded Gidley to score his second and Bootle’s seventh.

Gate were able to grab another consolation goal. Once again it was Boyd who hit the net after finding space in behind the Bootle defence.

An effort from Haworth then flew narrowly over the bar and then a deflected effort by Kieran Feeney struck the woodwork but that was to be the last of the action.

A match to forget for Gate on a tricky afternoon against a very strong Bootle side.