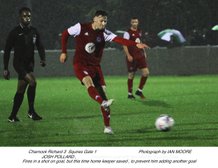 Following three defeats in three at the start of the league season, Gate travelled to Mossie Park to face Charnock Richard. Jordan Gidley and Luke Holden returned to the starting line up while Jamie Ramwell and Dec Baldwin started ahead of Elliott Pond and Sam-Staunton Turner.

It was the hosts who had the first sniff of goal, with skipper Carl Grimshaw having a shot from close range well blocked by the Gate defence. Lewis Haydock then hit wide on the stretch after a good ball from the right hand side.

Charnock made their dominance pay on 19 minutes. A ball over the top of the Gate defence found Brad Carsley who found the bottom corner with a clinical finish past Gidley.

Gate looked to hit back with a shot from Josh Pollard deflecting just wide of the target. Dean Ing then had a shot well blocked after the hosts lost the ball in their own half.

Just as it looked like Luke Evans’ men were getting back in the game, Charnock doubled their lead on 24 minutes. A ball was played over the Gate defence and Gidley came out to clear but sliced his clearance, allowing Carl Grimshaw to cut inside and smash in off the post with Gidley out of position.

Ing then had another shot blocked for Gate after being found by Andy Haworth. Gate then came even closer, with an effort from James Boyd cleared off the line after the hosts failed to deal with a Gate attack.

But with 36 minutes on the clock, the hosts grabbed a third, punishing Gate for their missed chances. A cross from Luke Power found Lewis Haydock who made no mistake with the finish.

The lively James Boyd went close again for Gate five minutes later. The winger found space on the left hand side and fired a shot towards goal but the goal-bound effort was superbly blocked.

Luke Evans’ side started the second half strongly, pulling a goal back on 53 minutes through Josh Pollard. Gate countered brilliantly after clearing a corner and a strong run by Andy Haworth opened up space which Haworth exploited with a perfectly timed through ball for Pollard who finished clinically past the goalkeeper.

James Boyd fired an effort over the bar on 60 minutes, which was followed by Charnock captain Carl Grimshaw finding the net again only for the offside flag to go up to disallow the goal.

Another good chance for Gate then went begging. A corner from Boyd wasn’t fully cleared with the ball falling to Cameron Gourley who volleyed straight at the goalkeeper who had just lost his balance.

On 75 minutes, it looked as if Gate had pulled another goal back. The Charnock goalkeeper slipped when taking a routine free-kick which gave Ing the ball on the edge of the box who put the ball into the empty net. Despite seemingly allowing the goal to stand, the referee blew his whistle and disallowed the goal and allowed the free-kick to be retaken.

Gate carved out a few more half-chances in the later stages but were unable to further cut the deficit. Boyd, Pollard and substitute Ryan Dodd all had efforts that failed to find the back of the net as the hosts were able to hold out strongly for the victory.

Defeat for Gate at the hands of a well drilled Charnock Richard side despite a spirited second half performance from Luke Evans’ men.