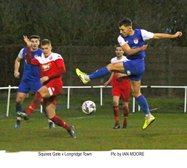 Gate fall to defeat at the hands of a strong Longridge side after a clinical first half performance from the visitors.

Following last weeks narrow defeat to Avro, Gate returned to the Brian Addison stadium for just their fourth home league game of the season. Luke Evans made just one change in his starting 11, with Ryan Riley making his first start since September in place of Dec Baldwin. Josh Westwood meanwhile returned to the bench after missing last week’s game.

Following a scrappy start to the match, the visitors won a penalty after 8 minutes with striker Owen Watkinson going down in the area. Watkinson stepped up and smashed the penalty past Danny Eccles who’s touch wasn’t enough to keep out the spot kick.

The visitors’ lead was doubled soon after, with Paul Turner rounding Eccles and dispatching the ball into the net after a pinpoint through ball from Watkinson on 16 minutes.

Watkinson threatened yet again five minutes later, but loanee centre-back Sam Barrett made a vital challenge to prevent the striker a clear route on goal.

Gates first action at the other end came through Dean Ing on 24 minutes. The striker did well to chest down a long ball and force his way through the Longridge defence, however his low effort was well held by the goalkeeper.

The visitors grabbed a third however just five minutes later, once again through Watkinson. The visitors counter attacked after Gate lost the ball high up the pitch, with Watkinson eventually charging into the area and unleashing an unstoppable drive into the far corner. Watkinson then went close once more, hitting just wide from the edge of the area.

Gate were looking to get back into the game though and began to keep more possession of the ball. Winger James Boyd had an effort from just outside the box well blocked, and had a chance to go through on goal after a good ball from Ing but his touch let him down and the chance was missed.

Luke Evans made a change at half time, bringing on skipper Josh Westwood for Sam Barrett.

It was a bright start to the half from Gate too, Ryan Riley cut inside from the right hand side and hit a shot just wide of the post, and then a cross from Riley was headed towards goal by Westwood but was again well held by the Longridge goalkeeper.

Josh Pollard was then introduced on the hour make in place of Riley, and almost created a chance instantly. The midfielder showed great footwork and played a dangerous through ball towards Kieran Feeney but the goalkeeper was quick off his line to get there first. Feeney then had an effort from the edge of the area drop just wide of the post.

Gate kept going, with Boyd and Ing both having powerful efforts blocked. Eccles was also called into action at the other end, denying Ben Fletcher from close range on 81 minutes.

Substitute Jack Iley then put a dangerous ball across goal but couldn’t find a Gate shirt, Eccles and Jake Higham then combined to clear an strong effort off the line.

A solid second half performance from Gate isn’t enough following a clinical performance from the visitors before the break. Luke Evans’ men return to action on January 2nd with a trip to Warrington Rylands.