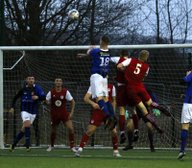 After almost two months away, Gate returned to league action with a tough trip to Avro. Luke Evans handed starts to new signings Danny Eccles, Oliver Soithern, Sam Barrett and Chris Webster who all made their competitive debuts.

It was a bright start from Gate, with Dean Ing having the first shot of the match after three minutes well blocked after a accurate through ball from his strike partner Kieran Feeney. The latter then went close himself just a minute later, having a goal-bound header blocked from close range.

15 minutes in, Ing had another good chance. Dec Baldwin, playing on the right of midfield, sprayed a perfect long ball over the top of the Avro defence but Ing could only strike wide from the edge of the area.

Eccles was then forced into action at the other end, making a strong save at his near post after a goal kick from the opposition goalkeeper caused some slight confusion in the Gate back line.

Ing was then thwarted again on 28 minutes. A well worked corner was missed by Feeney but the ball landed to Ing inside the box who had his shot superbly blocked by a brave Avro defender.

The end-to-end action continued as Eccles got down low to make a fairly comfortable save from Avro’s number 9, Ing was then played in behind by another superb pass from Baldwin, but again Ing fired wide under pressure from a recovering Avro defender.

The second half started slowly, with both sides battling well in the midfield and shutting down any threat from the opposition.

However the deadline was broken on 55 minutes, and it was the hosts who went ahead. A direct free kick that was hit low towards the bottom corner was well parried away by Eccles but Avro reacted first and bundled the ball into the back of the net.

The hosts threatened to add a second, with their number 7 dragging wide from the edge of the area on 64 minutes. Eccles then produced another fine stop, denying Avro’s number 4 after a fierce low drive from distance.

Ing went agonisingly close to an equaliser on 72 minutes, heading over from close range after a pinpoint corner by James Boyd.

Gate were left to rue this missed chance as the hosts then doubled their lead just two minutes later. A dangerous ball from the right hand side was played across goal and Gate midfielder Webster could only put the ball into his own net in an attempt to clear the ball.

Evans made three changes after this, bringing on Josh Pollard, Jack Iley and Ryan Riley.

The hosts seemed to be thwarting any threat of a Gate attack, that was until the 89th minute where substitute Iley netted on his return to the team. Ing spread a good ball to the right hand side of the area to Iley who drilled a powerful strike through the legs of the goalkeeper to reduce the deficit going into added time.

There was time for one last chance for Gate but it was a difficult one, and Riley could only hit over on the volley from distance after a good knockdown from Iley.

A narrow defeat for Gate who created many chances throughout the game and battled superbly in the midfield.