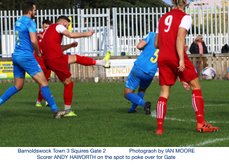 Following two defeats in as many games in the new league season, Gate travelled to The Silentnight Stadium to face Barnoldswick Town. Luke Evans welcomed back Dean Ing to the starting eleven while new signing Jacob Ridings started at right-back. Matty Garrett started in goal meanwhile with Jordan Gidley unavailable.

Garett was called into action seven minutes in, holding on well to a shot from distance. The hosts then hit the bar with a close range header two minutes later, with the flag going up soon after.

James Boyd was the first to threaten for Gate, breaking through on goal on 11 minute. A through ball by Josh Pollard found Boyd in behind the Barnoldswick defence but a loose touch from the winger allowed the hosts to clear their lines.

On 19 minutes, Andy Haworth was also able to break through on goal but was denied by a smart stop from the goalkeeper. However, Haworth was able to make up for his missed chance from the following corner. The delivery from Boyd was headed towards goal by Dean Ing and Haworth was on hand to poke past the goalkeeper in a crowded penalty area.

Gate then capitalised further on their bright start, doubling their lead on 26 minutes. A superb free kick delivery by Boyd was met by Dean Ing at the back post who headed powerfully into the back of the net on his first league start of the season.

Just three minutes later, the hosts pulled one back against the run of play. Space opened up on the right hand side and Zack Dale cut inside and curled a wonderful effort into the far corner, coming off the post and giving Garrett no chance.

The hosts levelled things up just two minutes later, with Alex Ralph burying an emphatic strike into the top corner from the edge of the box.

The comeback was then completed on 39 minutes, with Barnoldswick taking the lead through Gareth Hill. Gate failed to clear their lines the ball was played to the edge of the box with Hill arriving late to guide the ball into the bottom corner.

Gate looked to bounce back at the start of the half, clearly fired up from a half time team-talk from Evans. Elliott Pond was agonisingly close to connecting with a ball across goal from Dean Ing while a shot from Ing itself well held by the goalkeeper five minutes later.

Jake Higham was next to come close for Gate. Andy Haworth sprayed a excellent cross-field ball to the left back who arrived on the edge of the area. Higham controlled his volley well but the ball went just wide of the far lost.

Dec Baldwin and Haworth each had half chances in the following stages but were both unable to find the target. Dean Ing’s strong effort on 77 minutes was then well saved by the goalkeeper.

Gate’s best chance of the second half fell to James Boyd on 80 minutes. Substitute Jamie Ramwell did superbly to break away on the right hand side and pulled the ball back to Boyd unmarked on the edge of the area but the winger ballooned the ball over the bar.

This proved to be Gate’s last real sight of goal, with the hosts defending strongly to see out the victory.

A narrow defeat for Luke Evans’ men after a spirited comeback from Barnoldswick who held out strongly in the end.