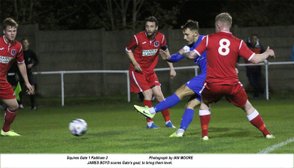 Gate lose their second game running in the new season at the hands of a well organised Padiham side.

Following Gate’s 3-2 defeat to Congleton Town on Saturday, Luke Evans’ men returned to The Brian Addison Stadium to host Padiham. Evans named an unchanged starting eleven with the likes of Dean Ing and Ryan Riley still unavailable for selection while 16-year-old Tom Smith made the first team squad for the first time, starting on the bench. Reported by James Ashton.

The visitors started on the front foot, with Ben Ashton racing through on goal inside two minutes only to see his effort saved onto the bar by Gate ‘keeper Jordan Gidley. Gate then only just dealt with a dangerous Padiham corner while a cross from Chris Anderson bounced just wide

Padiham made their early dominance pay, opening the score on 6 minutes. Willem Tomlinson found space behind the Gate defence and squared the ball to Dom Craig who tapped into the empty net.

Gate looked to bounce back though and got themselves on the front foot as a corner fell to Cameron Gourley who headed off the bar. A Padiham defender then cleared a follow up effort off the line with the ball then falling to James Boyd who fired wide.

Boyd was able to make up for his missed chance just two minutes later. Good hold up play from Elliot Pond led to the striker laying the ball off for Boyd who found the bottom corner with a superb low drive on his weaker left foot to level things up on 13 minutes.

Andy Haworth then made a strong drive through the Padiham back line and had a strong effort well saved while Boyd volleyed over from a tight angle after a deep cross.

Another chance went begging for Gate on 35 minutes as a free kick from Josh Pollard caused havoc in the Padiham area. The ball fell to Cameron Gourley who could only poke the ball straight at the keeper under pressure from a few defenders. Andy Haworth then had a header comfortably held by the goalkeeper.

Gate started the second half in similar fashion as they put the visitors under pressure from the off. Haworth had a powerful effort deflected over the bar while Boyd missed a great chance, hitting straight at the goalkeeper after being found in space by Pond. Pond himself then went close for Gate. The striker produced a superb turn outside the area and had a strong shot well saved.

Jordan Gidley was then called into action at the other end, making a good save to deny Dylan Glass just moments after Ben Ashton headed wide from a tight angle for the visitors.

Josh Westwood, who got on the scoresheet on Saturday, had a great chance to put Gate in front on 55 minutes as he met a dangerous Boyd corner from close range but couldn’t hit the target. The centre half then had another header fail to hit the target 10 minutes later.

Then on 73 minutes, against the run of play, the visitors won a penalty. Ryan Dodd was caught in possession in his own box and tripped Dom Craig in trying to win the ball back. Luckily for Gate, Gidley produced a smart save to deny Mark Ayres from the spot to keep the score level.

The Gate keeper was called into action again on 86 minutes, making a superb reaction save to deny a goal- bound effort from Tomlinson.

Just as it looked like the game was going to end as a draw, the visitors won another penalty in added time. Dylan Glass broke though on goal and despite it looking like Gidley clearly won the ball off the striker, the referee pointed to the spot, much to the anger of Gate players and management alike. Glass stepped up and buried the penalty into the bottom corner to win the game for Padiham

A second successive defeat for Gate who will feel hard done by the late penalty decision. Luke Evans’ men return to league action on Saturday as they travel to Barnoldswick Town.