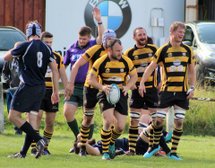 Focused Stafford run in ten tries in the final friendly match before mounting their assault on the 19/20 season.

Stafford welcomed Buxton to Castle Fields for the final friendly match prior to the season starting in earnest next week. The Derbyshire side bought a strong squad across the county border and a warm dry afternoon promised good running rugby from both sides.

Stafford fielded a large squad comprised of established, new and returning players. The home side showed their intent from the first whistle, the forwards crashing through the travelling defence and a flying set of backs throwing the ball around. The first try came after a tenacious Phil Brown ripped the ball from the opposition and slick hands fed Jerry Qasenivalu who tore down the wing for a try, converted by Christian Ureche. Buxton fought hard but Stafford built on the momentum and the visitors could only watch when Josefa Maka sent a spiralling long pass which eventually found Callum Jones who dived across for the second try of the afternoon. The third try soon followed as the mass of the Stafford forwards propelled Callum Hoy across the line to establish a comfortable lead. A yellow card temporarily reduced the county town side to fourteen on the pitch, but didn’t interrupt the ferocity of the attack. A further swarming attack concluded with a difficult pass which was juggled in one hand by Quade Boal whilst handing a player off with his free hand, ball secured he stepped past three defenders for the fourth try. Stafford went into half time with an impressive 22 – 0 lead

The visitor’s afternoon didn’t get any easier when a yellow card temporarily reduced them to fourteen on the pitch early in the second half. The Stafford forwards took full advantage through a series of dominant set pieces which ate up territory to put the home side within sight of the line. A bruising final charge by Carl Williams rolled over anything in the way for the fifth try, converted by Dan Mills. The pace was relentless and with the Stafford attack exploiting the smallest opportunity from any part of the pitch. The sixth try came from a prowling Gareth “Obi” Ley as the home side stretched the tiring defence, the seventh being added in the same corner by Lewis Cantrill and converted by Christian Ureche. Leading from the front captain Callum Jones took his second try of the afternoon and added the conversion. A brief period of play saw some good counter attacking rugby from Buxton which drove into the Stafford half. The momentum was abruptly halted when the home side re-secured the ball and several pairs of safe hands released Eliki Qalo for his debut 1st XV try. The game drifted into the dying minutes, but there was still enough time on the clock for Dan Mills to meander off on an impressive run which ended in the final try of the day by Christian Ureche.