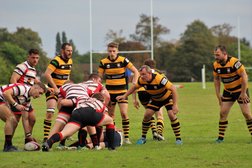 Stafford play for thirty minutes with fourteen players against a confident Moseley Oak XV looking for their first win of the season.

Stafford travelled deep into the heart of the Midlands for the second away game of the season against Moseley Oak. The two team hadn’t met in the league since 2015/16 which was the home sides promotion winning season. Billesley Common has traditionally been a difficult hunting ground for Stafford with only one league win in their last five visits.

The game opened with some good Moseley Oak pressure which ate up territory to secure good field position. A couple of penalties kept the home side lodged within sight of the visitor’s line and a third quickly taken penalty caught Stafford napping with Moseley Oak crossing the line for the opening try. The hosts continued to play in opposition territory and it eventually took a Sam Egerton clearance to put Stafford into Moseley Oaks half for the first time in the game. A subsequent line out and drive tore through the home side with Stephen Frost at the bottom of the pile for the equalising try, converted by Christian Ureche. The travelling XV started to play some good phases of rugby and an athletic leap by Dan Mills stopped a clearance kick going out of play. The ball flew across the pitch to release Jerry Qasenivalu who flew down the wing and got within sight of the opposition try line. A commanding Stafford were camped out in the Moseley Oak half and all of the pressure eventually resulted in a penalty which was slotted through the uprights by Christian Ureche for the lead. The increasing sound of the referee’s whistle started to disrupt what had been a competitive game, with the visitors incurring the majority of the wrath. A Moseley Oak penalty levelled the scores before Stafford were temporarily reduced to fourteen courtesy of the first yellow card of the afternoon. With a man short the county town side continued to dominate maintaining attacking field position. A scrum under the posts allowed Alex Rock to throw a dummy which ripped open the distracted defence and slick hands fed the ball to Ted Dinning who crossed for the second try of the afternoon, converted by Christian Ureche. Stafford went into half time leading 10 – 17 but struggling to respond to an increasingly demanding referee’s whistle.

The second half stuttered its way through the first five minutes as the referee penalised several infringements but ended in Stafford being restored to a full XV. The game dissolved into a confused affair as the visitors incurred penalty after penalty with the occasional decision going against the home side. A second yellow card reduced Stafford back down to fourteen as they tried to comply with the referee. Moseley Oak responded with some strong attacking play allowing the home side to exploit some missed tackles and score a try in the corner to bring the scores within two points. A third yellow card of the afternoon, this time for the home side, temporarily evened up the numbers in a game looking for some continuity. The Birmingham side settled the fastest and some simple rugby saw an elusive run from the Moseley wing eluding everyone for the third try and he soon claimed the fourth after chasing down a spiralling kick. With fifteen aside back on the pitch the game was still close and could have swung either way. A short spell of rugby saw Stafford making good ground and threatening to break through the Moseley Oak defence. Any momentum that the visitors managed to create was soon shattered when the final yellow card of the match reduced them down to a now familiar fourteen. A Moseley Oak penalty stretched the lead for the home side, as a flagging game drifted towards the final whistle to ended a disjointed second half of visiting rugby.