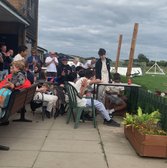 A fitting finish to a fantastic season

A great time was had by all at our end of season Juniors awards day last Sunday.
Parents vs Juniors games took place on both pitches through the afternoon with the under 11s match ending in a tie for the second year running and the under 14s game finishing in a hotly disputed draw!
A superb barbeque was laid on and the bar was kept busy well into the evening.

The under 11s and 12s teams also collected their league winners medals.

Thanks to everyone involved in organising the day and a special mention to our Under 14 skipper Alex Colbourne for a great speech in awarding the Captains Player trophy to Riley.

Lets look forward to winter training and an even bigger and better season in 2022.