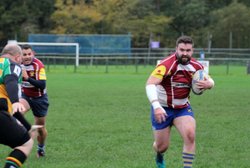 Following on from a stop start November, December has been a more positive month for all rugby clubs. The start of this month saw an end of the national lock-down and a move back into the regional tiered system albeit with additional restrictions across the country. The squad resumed training on Thursday 4th December with 40 players in attendance and an inter club tournament. Despite the disruption the squad has displayed great commitment and the club is in a strong position heading into next year.

We have progressed to Stage E on the RFU return to rugby road-map. This means that we can now play contact rugby and competitive fixtures. The format is an adapted form of the game with no scrums or mauls, however, the other aspects of the game are largely unchanged. Additionally, players are now able to use on site changing rooms and showers with restrictions on capacity and distancing measures in place. The clubhouse bar is currently closed as we do not provide substantial meals, updates will be provided as the situation changes.

Recent weeks has seen the welcome return of fans to games. There had previously been a number of pilot events, but this is the first time since March that this has been done across the board. Sports including Rugby Union, Football, Rugby League, Snooker, Formula One and Boxing all welcomed back supporters to events. The number of people who can attend varies depending on tier and ground capacity. Spectators will be allowed to attend games at St Albans in accordance with the Tier rules, however, it is important to stress that we will confirm how this work in due course. Thank you in advance for your patience.

Last Tuesday saw a return to contact training and we have also received confirmation that we can play contact fixtures from 18th December. The return of contact was greeted with enthusiasm by the players and coaching staff, although bodies were sorer that usual! A mention must once again go to Richard Hope - (head coach) and Lewis (Gaffney - S&C) for working closely together to get players physically prepared with a phased returned to contact. We can confirm that our first fixture will be away to local rivals Welwyn on 9th January 2021 in what is certain to be a very tough contest. Thank you to Paul Mather for organising this fixture. We will be taking two teams, a 1st XV and a combined 2nd/3rd XV and hope for a successfully afternoon. There are also provisional dates for 16th, 23rd and 30th January, 20th February, 6th and 27th March, 10th, 17th and 24th April.

There have been some changes to player personnel for our 2nd XV and 3rd XV's. Scott Miniekis is moving from 2nd XV to 3rd XV captain. Mark Pragnell has stepped down due to work commitments and we would like to say thank you to Praggers for his organisation and commitment last season. The welcome return of our 3rd XV was one of many fantastic successes last season. We also thank Scott for his leadership of the 2nd XV, overseeing a league title and unbeaten season. Replacing Scott we are delighted to announce that Chris Jones (CJ), Daniel Satchell and Harry Trude will be working together as co captains. The club took the decision this year to go with this set up as it would also enable players to move up to the 1st XV and still have a match day captain in the 2nd XV. Congratulations to all three players, each of whom displayed string leadership during last season. Anthony Stevenson will continue as 1st XV captain.

We have had some player departures this month, most notably our forwards coach Charles Woollard has left us after a season and a half at the club. Charles has been a regular feature for the 1st XV, playing in the front and second row and has also been a great leader on and off the pitch. Charles departs us for pastures new at Ampthill to take up a fantastic opportunity to play in the Championship where he will be competing against the likes of Saracens, Ealing, Coventry, London Scottish and Jersey. Good luck from everyone at St Albans.

Away from the rugby, the commercial arm of the club continues to grow. We welcome AS Homes and Construction on board as a new sponsor. Thank you to everyone at the company for their support and we look forward to working with them. In what has been an extremely challenging year for businesses it is testament to the clubs hard work that we have still been able to attract local company's, as well as the generosity of people within the community to invest in the club.

Finally, we would like to wish all of our members, supporters and sponsors a very Merry Christmas and a Happy New Year. Hear is hoping for a brighter 2021.