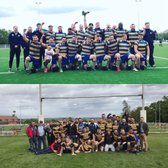 St Albans RFC 1st and 2nd XVs were involved in County Cup Competition finals last weekend with both sides putting in brilliant performances to win their respective matches and swell the clubhouse trophy cabinet.
The 2nd XV led by captain Scott Mineikis were at Cheshunt RFC ground on Saturday 27th April for the final of the Herts & Middlesex Merit Table 4 NE competition where they faced Hendon 2nd XV. The match was played in difficult conditions with St Albans electing to play down-hill in the first half with a strong wind in their favour. With tries from John Sayers and Conor Mayer and a conversion and penalty kick from Joe Nelson, St Albans went into half time with a 15:0 lead. This was always going to be tough to defend against the elements in the second half, with Hendon mounting several threatening attacks through their back line. Their endeavours were rewarded with two second half tries and a penalty, but St Albans maintained their composure and with another forward’s try from Sayers and a superb individual try from full-back Ollie Askew-Fountain who fielded a high kick to run from his own 22m line to score under the post in the last 5 minutes, St Albans finished the match with a fine 29:13 win and the trophy.
The 1st XV led by captain Tony Stevenson were at Harpenden RFC on Sunday 28th April for the final of the Herts Presidents Trophy against Herts/Middlesex 1 Champions, Hitchin RFC. The game, played on the “all weather” pitch in front of a large crowd was always going to be close with their league matches ending up evens with one win each.
St Albans started the match at great pace with the pack dominant in both the set pieces and in the loose. Under the control of scrum half George Elliott, St Albans played most of the opening 20 minutes inside the Hitchin half building up a 15:0 lead with a penalty from Elliott and tries from centre George Saunders and forward Charles Woollard. Despite the 15:0 advantage and the St Albans impressive back line making frequent in-roads into the Hitchin 22, St Albans were unable to capitalise and add further to their lead as Hitchin re-grouped and scored twice before half time with two tries (one converted) from their resurgent forwards. At the break, the score was 15:12 with St Albans ahead with a slight advantage.
The second half was again a hard fought contest with both sides evenly matched and the score line remaining at 15:12 for much of the time. The stalemate finally was broken with approximately 10 minutes left on the clock. St Albans were on the attack inside the Hitchin half when an error was capitalized on by the Hitchin back line. The ball was moved out to their winger who kicked the ball forward from just within his own half and narrowly managed to out-pace the St Albans defender to score in the corner. This was unconverted, but Hitchin were in the lead for the first time in the match at 15:17 with St Albans facing the disappointment of a narrow loss. This disappointment did not last for too long as from the re-start St Albans managed to turn-over the ball inside the Hitchin half and after some good work by the forwards, Ross Taylor (back row) broke through the Hitchin defence, side stepped the full back to score a try under the post to redeem himself after receiving a yellow card earlier on in the second half. The try was converted by George Elliott and with only minutes left to play, St Albans held on and ran out winners 22:17.
Congratulations to both St Albans and Hitchin who contributed to an extremely competitive and close game, a fantastic curtain raiser for the Tankard and Cup finals that followed.
Share via
FacebookTwitter
https://www.pitchero.com/clubs
Recent news