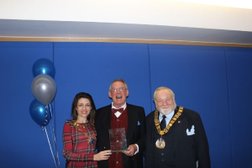 Our own David Gilroy collected a Lifetime Achievement Award at the Service to Sport Awards held at the University of Hertfordshire.

On Thursday 5th December at the University of Hertfordshire the 2013 Service to Sport Awards were held. This is an annual event in its 10th year, and is run by the Herts Sports Partnership to recognise the fantastic efforts of all the volunteers involved in the 50 or so sports in Hertfordshire.

David was nominated for a "Life Achievement Award" based upon his commitment to St Albans Rugby and tireless campaigning to get St Albans a swimming pool it can be proud of.

This is what the said about him;

“ David began playing rugby at Old Verulamians in 1975 and was also occasionally ref and touch judge.1985 moved to St Albans RFC-since when he has been variously player,web manager, Vice President,archivist, press match reporter, photographer and has been a RFU Club Touch Judge most Saturdays during the Sept to April rugby season for about 21 yrs at home and away league and cup matches, come rain or shine. ( Hundreds of Saturdays!)

Outside of rugby he set up the PoolTooSmall group campaigning for changes to the Westminster Lodge Pool, bringing about half a million £'s worth of changes to the £25 million development resulting in the largest 25 metre regional competition pool in Herts. A regular pool user, in 2009, he realised that the proposed scheme would not make the pool big enough, now it will cope with customer growth without overcrowding for the next 30 yrs-a real legacy! He is still working with management to ensure the best is made of the facility.

David is a real inspiration to everyone he meets-full of the joy of life, a terrific ambassador for Herts Rugby, known in senior rugby throughout Herts, in all the neighbouring counties, Twickenham RFC have heard his laugh a fair few times as well! He changed the way his club reports matches , writing press releases which show the fun and humour in the sport .At a great age still running touch for his club and taking the photos he is also still heavily involved in swimming management.”

From all of us at St Albans Rugby Club, well done Dave!