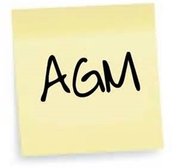 Club Chairman John Martin has issued a statement regarding this years AGM.

As there is only I nominee for each of the positions that are voted for at the AGM, as well
as concerns regarding club member's safety due to Covid19, it has been decided that
there will be no AGM this year.

I would like to congratulate all players who put in the time and commitment to earn
the club promotion for the 1st and 2nd teams, and the 3rd team that fulfilled all their fixtures
finishing in the top half of their merit table.

Thanks go to Paul Mather and Richard Hope for their continued enthusiasm and support
to all players and to captains Tony Stevenson, Scott Mineikis and Mark Pragnell.

I would also like to thank club members that do things around the club that go unnoticed.
Thanks to Mark Elliott, Ron Hayes, JK, Terry Evans, Tony Golds and to Dave English who has been
a great support in the running of the club.

Lastly a special thanks to Fraser Morris for his continued efforts in raising sponsorship money
for the club. Fraser is made a Vice-President (VP) in recognition.

I look forward to the new season, whenever that may start, with optimism.