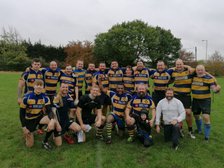 Preseason? The 3rds are already playing!

Saturday 29th June saw a unique first in Vets rugby in the St Albans area as BOTH St Albans RFC and OVs Vets came together and played over 35s Masters Rugby for the Centurions.
60 minutes of action under the 33° unrelenting Sun still produced scintillating rugby that reminded these club stalwarts just how good they still were!
Mark Prangnell, Danny Batchelor, Mick O'Shea, Iain McIlwee, Julian Palmer-Rhodes and Keegan DB Cyrus represented St Albans RFC, whilst Simon McCullough, Jon Ward, Ben Moralee, Jason Presence and Phil Bignell turned out for OVs!
All agreed that any games like these should be Played in, so that the Vets season can really get a head start. All were willing to play for each other so games get played.
Well done them!
That's not all.
3rd XV hero Godson Sado played for the Seniors who won and he was Man of the Match!
Well done him!
Share via
FacebookTwitter
https://www.pitchero.com/clubs
Recent news

The 3rd XV are back in action in the HMMT5 SW/NE League. In an effort to get the new/old team together a bit before the season, anyone over 35 is invited to play in the Centurions Masters game just up the road. Mark Prangnell, Keegan DB Cyrus and Mick O'Shea are all confirmed and last time Dan Batchelor, Harry Toland, Will Batchelor, Iain McIlwee, Warren Bayes, Paul Randall, Luke Seiger all played too.
FREE BEER FOR ALL PLAYERS IN THIS GAME. Provided by Mick O'Shea and brewed by local TV Brewer Kevin Yell and from the Farmers Boy.
Touch/Tag/Tackle variation on the regular game. Much Fun.