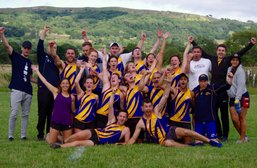 St Albans head to Cheltenham for Round 4 of the Development National Touch Series!

What a fantastic weekend in Cheltenham for St Albans Touch!

In the penultimate round of the 2019 DNTS, St Albans fielded an elite Gold team and a development Blue team.

Blue team started strong with a win against Thames Valley Vikings (3-2), followed by a loss to CSSC (3-4). In the bowl quarter final, Blue team beat Bournemouth Lions (4-3) and went into the bowl semi final. The team narrowly lost to Peterborough Tropics who scored in the drop-off (3-4).

St Albans Blue finished 11th out of 23 teams, an excellent result for our developing squad! Thanks to all of our guest players who completed the team!

Gold team hit the ground running, beating Chester Nomads 8-0. This was followed by closer wins against G-Force (5-4) and Cheltenham Tiger Cubs (4-2), putting us first in the pool stages.

Reenergised after lunch, Gold won the cup quarter final against Exeter Eagle Owls (6-0). In the cup semi final, Gold came up against frequent and friendly rivals Yorkshire Thorns and won with a very tight 2-1 score.

Progressing to the Cup Final, Gold faced the current tournament leaders and winners of the 3 previous rounds, Manchester Chargers. This was the first time the two teams had met, and after an action packed 20 minutes, St Albans Gold emerged victorious, winning convincingly 8-2 and coming away with the Cup.

St Albans Gold go into the final round of the DTS in second place, behind Manchester Chargers.