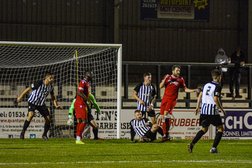 With the Daniels moving into the new Northern Premier League Midlands division there are many new opponents to face, as well as some familiar foe.

Moving up from Step 5 are Shepshed Dynamo and Sporting Khalsa. The former has already confirmed a fair few former Stamford players will be amongst their ranks when the season rolls around, with club legend Jordan Smith joined by Karl Whymark, Lynas King and John King. Promotion sees Shepshed rejoin the forth tier of non-league football for the first time since 2012. The last time the two sides met was in pre-season of the 2018/19 season with the Daniels running out the victors (2-0).
Sporting Khalsa join the league having been founded just 20 years ago. Despite their relative youth their rise through the West Midland football leagues has been impressive. Starting out in Sunday league football their progression was boosted by a restructuring in 2004, whilst in 2005 they became the first Asian Semi-pro club in the country to own their own ground. In more recent years they reached the forth qualifying round of the FA Cup, before eventually being beaten by FC United of Manchester.
Moving laterally are Bedworth United, Cambridge City, Coleshill Town, Corby Town, Daventry Town, Halesowen Town, Histon, Soham Town Rangers and Yaxley.
The return of Bedworth to the same league as the Daniels gives the chance for redemption following the 2017/18 playoff final defeat to the Greenbacks. That same season another of the new teams to the league knocked Stamford out the FA Cup. An August Friday night saw Cambridge City dump the Daniels out dashing any hopes of a repeat of the previous year’s First Round Proper appearance.
Coleshill Town have also dashed the Daniels’ hopes of an FA Cup run in recent years, ending the 15-16 season’s progression in short-lived manager Andrew Wilson’s first game. The return of Corby Town already seems to be a highlight for the season ahead, with a guaranteed good atmosphere at both games. In recent years a mention must go to the fog-fest of 2018, where two teams with aspirations of the playoffs drew 1-1 in less-than-ideal conditions.
Daventry move into the league from the Southern League Division One Central. The side are run as a Not-for-Profit community-based club. Halesowen Town come into the league having looked quite the force recently, even in the Covid interrupted seasons. This is most notable in their FA Trophy run culminating in 2020 where they were just a game away from a Wembley Final before being defeated by Concord Rangers. Also moving into the league are Histon, who the Daniels will be hoping to fare a little better against than the last time the two sides met, where Histon ran out 5-2 victors.
The penultimate of the two newcomers is Soham Town Rangers who move into the league from the Isthmian League North. Last but not least is Yaxley, who join the list of tasty looking local games within the new league structure. The last time the two sides met was a not so friendly pre-season fixture with the visitors receiving two red cards.
Share via
FacebookTwitter
https://www.pitchero.com/clubs
Recent news