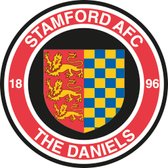 Stamford AFC can today announce that manager Graham Drury has signed a new contract that will keep him in charge until the end of the 2022/23 season.

Grahams contract extension is the natural next step having taken the club to the verge of promotion from step 4 last season, only for the league to declare it null and void due to the Covid 19 pandemic.

Starting strongly once again this season, Stamford AFC are now having to face the prospect of not being able to complete a second consecutive season.

Confirming the news, Chairman David Whitby said,“ With the commitment of the new contract, comes certainty and stability allowing Graham to further build his squad for longer term and pursue the clubs vision in moving higher in the football pyramid.”

“Graham’s energy and passion have a big impact throughout the club. This impact is central to the club’s success and I delighted he shares the club’s views that there is much to be achieved both on and off the pitch.”

“Graham has assembled a superb squad of players at the club, playing tremendous football and I’m sure that all Daniels supporters share my delight in the new agreement and in anticipating the exciting opportunities that, with continued hard work, are there to
be taken.”