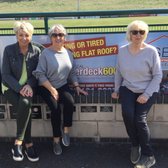 Two former directors have been added to the Daniels remembrance wall.

Vic Couzens who sadly passed away in January was club president as well as chairman and director for many years.

Also remembered was Bob Ford who served on the Stamford AFC board also passed away in January this year.

Plaques commemorating both men have now been placed on the Daniels memorial wall just inside the Zeeco stadium.

Pictured are Vic's wife Yvonne along with his daughter Tracey and Bob's wife Barbara.