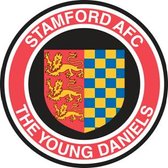 Sixteen teams from under 7 to u14s have registered in The Peterborough Junior Alliance League.

Under 15,16 and 18s will participate in The Peterborough Youth League with two u18s sides competing in the Northamptonshire Senior Midweek Floodlight League.

Club Director and Young Daniels Chairman Guy Walton commented “Our relocation in 2014 to The Zeeco Stadium & Borderville Sports Centre has focused our vision to be an inclusive, safe, educational and successful football development scheme in our local community and to increase participation, individual and team improvement whilst falling for and retaining a love for the game. To manage such challenging tasks and increase our registered player numbers we are delighted to announce Stuart Craig has joined The Daniels as our Development Officer with immediate effect”.

Stuart (53) is a capable business leader in his role as Marketing Manager for a large group of high-profile financial service providers. He has 16 years of experience in club development and joins The Daniels after 11 years with Glinton & Northborough FC with roles as part of the club helping them to grow from nine teams to 28 teams, attaining Charter Standard Club of Year three times and including East Midlands Club of the Year. Stuart was also voted FA Volunteer of the Year in 2012.

Guy added “Stuart has a keen eye for football development and club structure on and off the field and joins us after a successful spell as Director of Adult Football at GNFC with teams overseeing five promotions in six seasons, two league titles and six cup semi-finals”.
Stuart added “I am very excited to be joining such an established football club as part of a very hard-working team. Stamford AFC has incredible history, but has always driven forward and now thriving at Borderville, home at one of the best footballing facilities for miles around.”

“I’ve known Guy Walton since we both started our coaching journey in grassroots football together. I believe I share his development-based philosophy and have the same ambition for the growth of a football club and where it should stand in the local community. It will be brilliant to work with and learn from the team at Stamford and hopefully lend them some of my energy and time to help move great projects forward.”

The Club has also registered two Veterans teams for the coming season and continues to operate the successful Walking Football teams “Stamford AFC Strollers” with Taff Lovesey reporting over eighty regular players enjoying the health and social benefits of such a great new game.