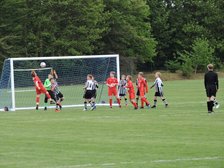 This completes a league and cup double for the under 12's after claiming the league title with 15 wins from their 18 league games.

The Under 15's then got in on the act with a hard fought 4-2 win over FC United Hammers. The young Daniels trailed 2-1 with time running out but they scored 3 times to claim the trophy. Goals came from Taylor Gilbert, Alex Sinfield and a double from Joseph Cox.

This weekend the under 10's and under 11's have their own cup finals with the games taking place at Stonald Road in Whittlesey.