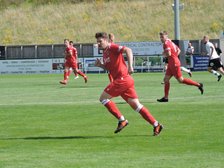 Daniels Edged Out By Posh

Stamford went down to a narrow one-goal defeat in their opening pre-season friendly against League One side Peterborough United on Saturday.

The clash was arranged as a private friendly at the request of the League One visitors who are bound by strict Covid-19 testing regulations and didn't want to encourage fans to turn up.

It was the first match in nearly five months for both clubs and Posh predictably had the lions share of the possession in the opening period.

However, they found a disciplined Daniels side difficult to break down as Posh looked to probe for openings against a Stamford line-up who were always quick to look for a counter-attack.

Home goalkeeper Dan Haystead was called into action early on as he made a tremendous save in the seventh minute to deny Mo Eisa after Stamford had been robbed of possession in their own half by George Cooper who fed a pass through to the Posh frontman.

Cooper then flashed a shot over from distance five minutes later before Stamford skipper Sean Wright made a crucial last-ditch tackle to deny Ricky Jade-Jones a free run on goal.

The Daniels did have their moments and Connor Bartle whistled a sweetly-struck 17th minute shot over the crossbar from outside the box.
The home side then had the ball in the net for the first time of the afternoon after 37 minutes.

However, Harry Limb's close range finish past Christy Pym was ruled out for offside from Tendai Chitiza's header back across goal following Cosmos Matwasa's inviting centre.

The Daniels went on to finish a half - which would end goalless - the stronger with Limb, Matwasa and Chitiza all looking threatening when Stamford surged forward.

Both sides made wholesale changes at the break after Stamford had started the match with what was virtually their first choice starting line-up from last season plus new signing Bartle at left back.

Serhat Tasdemir dragged an early second half opening wide for Posh before he sent in another shot which was heading for the bottom corner until Haystead tipped the effort around the post.

Idris Kanu headed over from a Boyd cross just before the hour mark which was when Duffy's afternoon was ended early due to injury which saw Chitiza reintroduced.

Haystead had to scramble across to turn away a Sam Cartwright shot before Posh broke the deadlock with 15 minutes remaining from the resultant corner when Bradley Rolt headed home from close range.

Stamford's response was instant and Chitiza teed up Jon Challinor whose well-struck effort brought a superb save out of Gyollai at full stretch.
The Daniels threatened on a couple more occasions, but the League One side always had the upper hand.

They had ran out 6-0 winners in the corresponding fixture last season against a rebuilding Stamford side who looked a different proposition this time around.