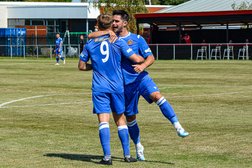 Stamford travelled to UCL division one side Melton Town on Saturday in their second preseason game of the new campaign.

The Daniels arrived at a hot Melton Sports Village looking to boost their fitness as they prepare for the new season.

Stamford started brightly and they were rewarded with a goal after about 11 minutes when new signing Jack McGovern received the ball on the left hand side of the penalty area and he cut the ball back to the evergreen Jon Challinor who swept the ball home with a shot that went in of the far post.

The Daniels doubled their lead a few minutes later when a short corner was played into Harry Limb and the forward crossed the ball from the right and he found Rob Morgan and the midfielder cheekily back flicked the ball into the net.

Due to the high temperatures the game was stopped every 15 minutes to allow the players to take on fluids.

Mid way through the half and the Daniels made it three. A long ball from captain Sean Wright and Limb chased and beat the Melton keeper to the ball and flick it past him into the net.

As the half progressed, Stamford continued to dominate proceeding and Harry Limb almost scored a second but his goalbound effort was blocked on the line by a Melton defender.

A fourth goal soon arrived when a free-kick was awarded close to the bye-line after a foul on Dec O'Hare. Challinor lofted the ball towards the far post and McGovern rose highest to head the ball into the net.

There was still time to finish the half with a fifth. Some fine passing eventually found new Daniels player Jack Duffy and he slid the ball into Challinor and he took one step and fired the ball into the goal beating the keeper at his near post.

At half time a raft of substitutions took place for the Daniels as manager Graham Drury looked to give all players valuable game time.

About five minutes into the second half and Melton had their first effort of the game but the shot was wide of the Daniels goal.

Stamford continued to look for opportunities to extend their lead and Cosmos Matwasa had a good shot saved by the Melton keeper before young forward Sam Bayly was sent clear of the Melton defence but his shot was straight at the home goalkeeper when he had Tendai Chitiza in a good position to score.

Stamford continued to make changes to rotate the squad and although had further chances to score through Bayly, James Hicks and Duffy they could not extend their half time score.

Overall a good workout for the team as they continue to prepare for the new season.