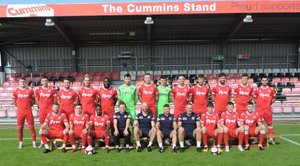 Early strikes from Tom Siddons and Connor Bartle were followed by Cosmos Matwasa's second half brace and a late penalty from Rob Morgan which took Stamford's pre-season friendly goal haul to 19 in the last three games.

A hard-working Harrowby side certainly had their moments though and created some good opportunities towards the end of the first period after Stamford had made a strong start.

Tendai Chitiza had already narrowly missed out on connecting with Matwasa's inviting cross when Stamford took a fourth minute lead.

Matwasa's hanging centre saw Siddons rise highest and, although his initial header hit the crossbar, Stamford's leading marksman from last season was quickest to react and stab home the rebound.

The Arrows responded with Tom Rigby sending over a looping cross which clipped the top of the crossbar before Chitiza thought he had doubled the Daniels' lead when he connected with Matwasa's cross only for home goalkeeper Charlie Wilkinson to claw the ball away from the line.

The Daniels did increase their advantage after 14 minutes when left-back Bartle burst forward and drilled home his second successive goal since his summer signing.

Teenage goalkeeper Wilkinson would have been disappointed to see the shot squirm from his grasp, but the 16-year-old responded with an excellent display by producing a series of brave blocks and solid stops to continue to keep Stamford at bay.

He made an excellent save after the lively Harry Limb had robbed Mathias Amponsem before the crossbar came to the hosts' rescue from another Bartle block-buster which deflected off Rigby.

Harrowby grew into the game as the contest wore on and had the better chances of the latter stages of the first period.

Liam Smith intercepted James Blunden's back pass which had fallen short of its target but dragged his shot wide when well placed.

Mustapha John then brought a good save out of Dan Haystead after a raid down the left and, from the resulting corner, the Stamford goalkeeper again excelled to turn away Kadeem Price's effort at point blank range.

Siddons saw a header well blocked by Wilkinson before Haystead was forced into action again to turn over a fierce strike from Henry Dilley.

Stamford were quick out of the blocks again at the start of the second period and took just three minutes to increase their lead.

Half-time substitute Jack Duffy won possession and played an astute pass for Matwasa to latch onto and slot home.

Wilkinson made another good save to thwart Chitiza who shot through a crowd of players before Stamford added their fourth goal after 66 minutes.

A low cross into the Harrowby box saw Matwasa pressure the home defence who were unable to stop the ball being bundled home.

Stamford continued to push for more goals and Jack McGovern's clipped cross hit the far post before Matwasa unleashed a thunderbolt which was bravely blocked by Amponsem.

Wilkinson denied Matwasa his hat-trick after standing up well to save when the Stamford winger looked to dink a shot over the advancing keeper before the Daniels sealed their win with eight minutes remaining.

Duffy was sent tumbling in the box and Morgan stepped up to fire home an emphatic finish from the resultant penalty kick.