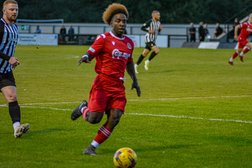 The home side were playing their first home of pre-season. They had former Daniels Curtis Hartley and Jake Duffy in their ranks.

The first chance of the game went to Corby when a cross from the right found Jordan Crawford unmarked but his shot was deflected away for a corner.

Corby took the lead on 11 minutes when a corner taken by Duffy was half cleared by Dan Haystead it fell to Connor Furey who crossed the ball back in and centre half Charlie Wise diverted the ball into the goal.

A few minutes later and Stamford had a great chance to equalise. Jon Challinor fed the ball into Tom Siddons and the Daniels frontman used his strength to hold off the Corby defender. The ball was then played into Tendai Chitiza whose shot was deflected into the path of Jordon Cooke and the Daniels right back powered a shot goalwards but straight at Craig Hill in the home goal.

The home side then had an opportunity to double their lead when Furey had a shot beaten away by Haystead and the follow up from Joel Carta was cleared for a corner.

Towards the end of the first half, Stamford had another chance to level. Harry Limb intercepted a stray Corby pass and his shot was blocked the ball fell to Harry Vince who passed to Rob Morgan and the Daniels midfielder had a shot to the near post but was comfortably saved by Hill in the Corby goal.

On the stroke of half time, Vince had a free kick in a central position but his shot was just over the crossbar.

In the second half, Stamford continued to look for an equaliser. Some good build up play saw the ball come to Chitiza and his shot went just wide of the far post.

Both sides then had chances to score but neither goalkeeper really tested.

The Daniels then had a great change to level when a quick freekick was played short to Rob Morgan who fed the ball down the line to Chitiza. The Daniels wideman crossed the ball deep to the back post where Jordon Cooke came steaming in and headed the ball goalwards but Craig Hill pulled off a magnificent save to deny the Stamford right back.

One other thing of note was the return from injury of Joe Burgess who rejoined the Daniels in the Summer following a season at Corby.