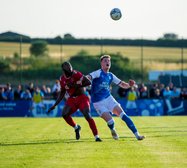 Championship side Peterborough United came to town on Tuesday night

Manager Graham Drury hailed a 'fantastic night' for the club as Championship side Peterborough United came to town on Tuesday night.

Darren Ferguson's newly-promoted side ran out 4-0 winners in front of a Covid-set capacity crowd of 900 at the Zeeco Stadium.
They netted twice in each half to defeat their Northern Premier League hosts who produced a disciplined and organised display against their professional visitors.

Drury said: "All in all for the club it has been a fantastic night for us.

"It's a really good learning curve for the players who have been stretched so their fitness levels will certainly be sharper.

"We can't thank Darren Ferguson and his players enough. They have been fantastic with us and always come down to give us their support. It was really pleasing and a great night for us."

Sammie Szmodics and a Siriki Dembele penalty in the latter stages of the first half put Posh ahead before Joe Ward scored twice in three second half minutes to secure the 4-0 win.

Boss Drury added: "I was pleased with my lads. It took Posh 30 minutes to score and our shape was good behind the ball which frustrated them a little bit because it was always going to be Peterborough's way in terms of possession.

"I felt we had done really well at half-time and, if we took the penalty out of it, they had only scored once from open play.

"Peterborough kept the ball really well in the second half and worked us hard so overall it was a fantastic work-out for us.

"The quality of their side is always going to pick you off in pockets and cause you problems but we created a couple of chances ourselves.

"The only thing that disappointed me was that sometimes we could have relaxed on the ball as we knocked it out of play or didn't find the right pass.

"We could have been a bit more composed on the ball, but we are only two weeks into pre-season so I was pleased overall."

The match was Stamford's first home game in front of their fans for more than eight months due to the coronavirus pandemic and the all-ticket contest sold out a couple of hours before kick-off.

Peterborough had scored eight times at the weekend in a friendly victory over Bedford Town who play at the same level as the Daniels.

But they found Stamford a tougher proposition to break down as Cameron Johnson curled an early fifth-minute effort well over for the hosts before Posh started to probe forcefully for openings.

Mike Armstrong did well to get back and make a superb covering tackle to deny Szmodics from Dembele's through ball before highly-rated young Daniels goalkeeper Max Peverell thwarted the provider by tipping over his shot at full stretch.

James Hicks had a header which went straight at Dan Cornell in the Posh goal before Szmodics burst clear onto another Dembele through ball but fired wide with just Peverell to beat.

Szmodics though made no mistake on the half-hour mark when he stabbed home a Ryan Broom cross to give Posh the lead.

Josh Knight then tested Peverell from distance but the teenage Stamford goalkeeper was equal to the low drilled shot.

Peverell then came close to preventing Posh from doubling the lead from the penalty spot after Dembele was felled as he got a hand on the spot kick but could not stop it fully from ending up in the top corner of the Stamford net.

Stamford put together some promising moves as the half drew to a close without troubling Cornell.

Posh fielded a separate side for the second period that included their summer signing Jorge Grant.

Mo Eisa saw an early free-kick repelled by a flying save from Peverell who was then scrambling at full stretch when Harrison Burrows unleashed a shot that was narrowly wide.

Peverell was then equal to a close range effort from Eisa before Posh increased their lead with 19 minutes remaining.

Nathan Thompson surged into the box and teed up Ward who unleashed a fierce finish into the far corner of the Stamford net.

Ward then rocketed home Posh's fourth off the underside of the crossbar three minutes later as the Championship side looked to finish with a flourish.

However, Rodrigo Goncalves had an effort deflected wide as Stamford rallied with Tom Siddons turning a cross goalwards only for it to be blocked.

Idris Kanu and Burrows both curled efforts narrowly wide in the latter stages before James Blunden made a superb late dash to block Ward in his bid for a hat-trick.

Posh had a chance to make it five with six minutes remaining when Kanu went down in the box but Peverell capped a superb display and highlighted his continued emergence by making a fine save from Grant's spot kick to deny the Championship side from increasing their lead further.

Boss Drury commented: "Max has done really well. He's starting to get a bit more vocal and the lads at the back are getting more confident in front of him.

Many thanks to James Bedford for providing this match report - james.bedford@iliffepublishing.co.uk