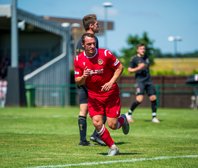 Stamford claimed the pre-season scalp of League Two side Northampton Town with victory in Saturday's friendly at the Zeeco Stadium.

First half goals from Cameron Johnson and James Blunden secured the win with Benny Ashley-Seal on target for the Cobblers in the second period.

Daniels boss Graham Drury was pleased with his side's display against a visiting side which featured the vast majority of their first team squad, plus a couple of trialists and academy prospects.
He said: "I was really pleased. I thought it was a fantastic exercise for us.
"We sat off and let the opposition have the ball in certain areas and were patient before we could lock on.
"We were back to our old DNA where, if one squeezes, we all lock on and get the overloads and the regains from it.
"It was evident to see. We looked quite sharp and were better in possession.
"The biggest difference was that we were brave in our distances between the defence and midfield and then the midfield and forwards.
"They must have played in front of us and thought it was a wall of red because we had such good shape.
"We didn't give sloppy passes away and pre-season is all about building blocks and this was a big step forward from the last game."
Stamford went into the match after a 4-0 home reversal against Peterborough United on Tuesday night.
In sweltering conditions in the midday heat, Stamford came close to suffering an early scare when over-playing at the back but Ashley-Seal was unable to take advantage as he slipped at a crucial point.
Paul Lewis then tested young Stamford goalkeeper Max Peverell with a low strike from just outside the box but the teenage custodian was equal to the task.

Stamford then stung their professional visitors by taking a 15th minute lead as Johnson burst into the box before rifling his shot past Jonathan Maxted in the Cobblers' goal.
And it was almost two moments later when Johnson teed up Rodrigo Da Silva but his effort was superbly saved by Maxted who showed rapid reactions after the shot took a deflection.
Northampton, as expected, responded by having the lions share of possession but they struggled to breach a well-organised Stamford side.
Lewis clipped a fine pass into the path of Max Dyche but his pulled back cross eluded any of his team-mates.
A posse of Daniels defenders then blocked Ashley-Seal as he unleashed a shot before Stamford increased their lead five minutes before half-time.

Harry Vince whipped in a free kick and Blunden rose highest to glance home his header into the bottom corner past the diving Maxted.
Northampton made eight changes at the break to Stamford's five with Stacey Freeman, Cosmos Matwasa, Rob Morgan, Mason Rhiney and Tendai Chitiza all being introduced.
Morgan looked poised to have a chance to further increase Stamford's lead straight after the restart but Fraser Horsfall got a vital flick on Connor Bartle's free-kick to deny the Daniels.
The Cobblers then halved the deficit with 55 minutes when Sid Nelson's pinpoint pass released Ashley-Seal who lobbed the advancing Peverell.

Ashley-Seal then close to converting a strong cross from Dylan Connolly after his powerful surge before the game started to open up in the final 15 minutes due to the heat and number of changes being made.

Peverell did well to deal with a dipping strike from Hull City loanee Jordan Flores while Matwasa was a constant threat to the Cobblers with his regular raids as Stamford showed enough enterprise to ensure they secured a confidence-boosting pre-season success.

Drury added: "All in all it was a pleasing afternoon. To beat a League Two side shows that we can match these teams and it was great to get a victory.

"I can't thank Jon Brady (Northampton manager) enough for coming down. He's a good footballing friend of mine and I hope he was pleased with the way that we worked them.

"They will have got a lot out of the game, seeing how they didn't break us down. They had to work it from side to side to try and find gaps and I don't think they found many."