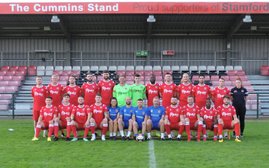 Graham Drury wants his Stamford side to increase their sharpness

Manager Graham Drury wants his Stamford side to increase their sharpness after concluding their home pre-season campaign with a six-goal victory over Holbeach United on Tuesday night.
Although the Daniels dominated large parts of the contest against their United Counties League Premier Division North visitors, Drury was frustrated that his side didn't make more of their possession.
They only had a Harry Vince penalty to show for their efforts at half-time before scoring five goals in the final 35 minutes of the contest.
Drury said: "I was a bit frustrated because I thought our movement was a little lethargic and how we moved the ball.
"We were very pedestrian in the first half again which is getting a bit of a theme at the moment.
"We do seem to pick up a bit when we get a goal but it does look like we've painted over a few cracks in the second half in a sense.
"We have got to be a lot sharper with our movement in front and crossing each other with runs and getting the wide men to come off their areas and create problems for centre-halves and not just full-backs.
"I am probably being picky because we've kept a clean sheet and capped off our final home pre-season game with six goals.
"Five of the goals came from open play as well which we haven't really been doing while Tom Siddons got one of them as well which is another plus.
"There were a lot of plusses but I think we need to get a little bit sharper for the competitive matches and we will be ready for when the real stuff starts."
Stamford had gone close on a couple of occasions in the opening 10 minutes with Cosmos Matwasa fizzing a shot narrowly wide of Andy Stukins' goal.
Holbeach then broke and Will Barnes drilled a low shot that rattled the home upright with Stamford then countering at pace only to overplay when well-placed.
The Daniels did then break the deadlock after 14 minutes when Sean Wright was clumsily fouled in the box and Vince slotted home the resultant penalty.
Rob Morgan fired just over following a slick move moments later before Matwasa missed a cracking chance to double the Daniels' lead as he shot wide with just Stukins to beat after being released by Tom Siddons' overhead pass.
Siddons then turned a shot over following a teasing Tendai Chitiza run as Stamford only had one goal to show for their possession in the opening period.
The Daniels made three changes at the break with Joe Butterworth, Rodrigo Silva and James Hicks all being introduced.
They came to increasing their lead shortly after the restart when Stacey Freeman turned a Vince corner against the post.
Freeman then laid the foundations for Stamford's second goal after 52 minutes when his pinpoint pass picked out Hicks whose cushioned lay-off saw Johnson beat Stukins to the ball before unleashing an instinctive first time finish into the net.
A third Stamford goal then followed 15 minutes later as the Tigers struggled to clear Vince's corner and Morgan bundled the ball goalwards with Hicks applying the final touch from close range.
Silva was then thwarted by a flying save from Brad Waters in the Holbeach goal before O'Hare slotted home a tidy finish for Stamford's fourth goal.
O'Hare was at it again moments later as he finished from close range following Chitiza's low cross to the back post.
Siddons then completed the scoring in the final couple of minutes as he rifled home after the ball had fallen for the Stamford marksman following a corner.