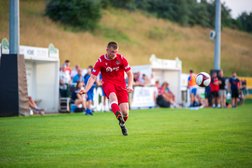 I am not here to be a dictator to the boys but to support them.

Two goals in the final four minutes sunk Stamford as Kettering claimed the win in Thursday night's friendly at the Zeeco Stadium.
The Poppies struck twice in the latter stages of a lively contest after James Blunden had given Stamford an early lead with his second goal in three pre-season games.
Callum Powell then hauled the National League North side level with a well-struck free-kick before their late show secured the win against a Stamford side whose display pleased manager Graham Drury despite the reversal.
He said: "I thought we played some good stuff. We was intelligent with our movement and kept the ball well.
"We defended well and created a lot of chances. We were lively for 75 minutes.
"We knew that they would be direct and, when they brought Kyle Perry on up top, you have to get him out of the box.
"You also have to keep possession to get up the pitch and we have given the ball away a couple of sloppy times and conceded two goals late on.
"We have to learn lessons from it and I am not here to be a dictator to the boys but to support them.
"Overall we got great legs out of the game, showed great movement and looked quite strong all over the park.
"We was aggressive in our play and it was a big improvement from Tuesday night."
With young goalkeeper Max Peverell sidelined, the Daniels brought in former Leicester City goalkeeper Conrad Logan who had played against Stamford on Tuesday night for Anstey Nomads.
Logan came close to being beaten in the opening four minutes when Decarrey Sheriff planted a towering header just wide of the far post.
Rodrigo Da Silva then rattled the upright at the other end with Kettering scrambling the rebound clear for a corner.
Connor Bartle's setpiece delivery was then met by centre-half Blunden who headed Stamford into a sixth minute lead.
Da Silva had another effort scrambled away moments later before Joe Burgess flashed a shot wide of the far post.
Logan then saved well at the feet of Sheriff as the Poppies responded before Cameron Johnson had a thunderous shot bravely blocked at the other end.
The Poppies levelled in style midway through the first half though when Powell picked himself up after being felled just outside the area to unleash a fine free-kick that flew into the home net.
Kettering came close to taking the lead moments later when the dangerous Powell set off on a piercing run before crossing to the back post where a shot was turned goalwards at full stretch only to hit the post.
Johnson was thwarted at the other end by a tidy stop from a free-kick before Logan saved well to deny Sheriff to ensure the teams went in at the break on level terms.
Stamford made five changes for the start of the second period with Sean Wright, Cosmos Matwasa, Joe Butterworth, Tendai Chitiza and Tom Siddons all being introduced.
And the continual changes from both sides, as in all pre-season games, disrupted the flow of what had been a lively end-to-end contest.
Stamford started to string the better moves together of the two teams and Johnson saw a curling effort kept out by a flying save.
A lightning Kettering raid then saw the visitors hit the upright for the second time in the game before Matwasa's lively burst and goalbound shot was well blocked by the visiting defence.
Kettering started to get on top as the game entered its final throes with Stamford having played 48 hours earlier.
And it was the presence of Perry that posed the home defence problems as he caused confusion after a diagonal pass was hit into the box and a trialist pounced on the rebound to put the Poppies ahead with four minutes remaining.
Kettering then grabbed their third goal two minutes later in an almost carbon-copy strike as Perry's pressure saw Stamford unable to clear and the same trialist was again on hand to convert from close range.