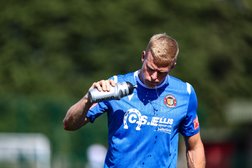 Daniels Beaten In The Heat

The Daniels took the lead after just four minutes when Jonathon Margetts played in Jack Duffy and last years top scorer slotted the ball past the home goalkeeper.

The home side equalised after 16 minutes when Carney scored past Dan Wallis.

If was Quorn who took the lead on 37 minutes when Karl Demidh scored.

In the second half lots of changes were made by both sides and Stamford looked for an equaliser but it was the home who scored a third when Patrick Webb scored past Ben Heath.