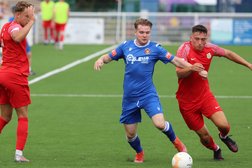 The Daniels ran in seven goals against step 5 side Melton Town.

Stamford opened the scoring on 13 minutes when Rob Morgan was fouled in the box. Jonathan Margetts stepped and sent the keeper the wrong way to score.

A second followed after 21 minutes when Connor Bartle picked up the ball and fired a thunderbolt past the helpless Melton keeper.

It was three after 27 minutes when Margetts collected the ball after Melton gave the ball away and he slotted the ball home.

Stamford had opportunity to extend their lead when first Cameron Johnson fired straight at the goalkeeper before Margetts put a header wide of the goal.

In the second half, due to injuries in the Melton squad this saw three Daniels players playing for the home side.

They were almost gifted a goal when Bartle tried to clear the ball but his header struck his own post.

There was a rush of goals midway through the second half when Connor Furey found the net before the home side grabbed a goal their efforts deserved through Tom Harris. The frantic few minutes finished with Margetts scoring.