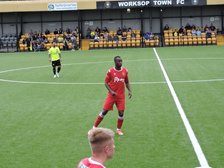 Stamford made the trip north to take on Worksop Town and suffered a five goal reverse.

The home side started well and forced a save out of Ben Heath in the opening quarter of a hour.

Worksop opened the scoring on twenty five minutes when a cross from the right was met by Liam Hardy and he rose above James Blunden to head the ball over Heath.

Just before half time, James Blunden met a cross but his effort was straight at the home goalkeeper.

Then Jay Rollins had an effort which was saved by Heath.

Into the second half and a corner was met by Blunden but his effort was wide of the goal.

Worksop grabbed their second on fifty-four minutes when Rollins was set free and he turned Blunden and fired his shot past Heath.

Stamford then had a chance when Will Mellors-Blair found Jonathan Margetts but he fired his shot over the bar.

Hardy grabbed his second on sixty-seven minutes when he was released down their right and he fired the ball into the net.

Worksop made it four on seventy-four minutes when Rollins turned provider and Luke Hall headed home.

The home side grabbed a fifth with ten minutes to goal when their captain Hamza Bencherif headed home from a corner.

In the dying minutes substitute Rodrigo Goncalves had an effort but his shot was wide of the goal.