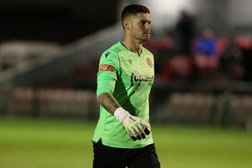 Stamford beat step 3 side AFC Rushden & Diamonds in a friendly.

The game was arranged as the Daniels were left without a competitive game. Stamford used 20 players including a couple of triallists.

Stamford opened the scoring on twenty-five minutes when Charlie Coppola fired a shot which deflected off a defender and over the Rushden keeper.

The Daniels double their lead when skipper Sean Wright met a cross from the left to head the ball into the net.

Rushden claimed a goal back midway through the second half when Jenson Cooper beat two defenders and scoring into bottom corner of the net.