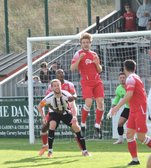 Stamford Back With A Bang

The Daniels returned to league action with a fine display over Daventry Town.

Stamford were playing their first competitive game in 18 days and first league game in over a month.

There was just the one change from the team that went out of the FA Trophy with Isaac Currie coming in for Connor Furey.

The opening period of the game was quiet with very little in terms of efforts at either end.

This changed after twenty-five minutes when Jonathon Margetts fired a shot at the goal but over the bar.

Then Daventry had a chance to open the scoring just before the half hour mark when a long throw was met by George Herbert, but the effort was over Dan Wallis’s goal.

This was followed by an effort by George Ball but Wallis easily saved the effort.

The deadlock was broken just before half time with two quick fire goals.

A cross from Joe Burgess on the right and after a couple of blocked efforts the ball came out to Jack Duffy who slotted the ball past Iustin Cerga in the Daventry goal.

The second came shorty afterwards when Duffy turned provider as he played in Margetts who made no mistake and doubled the lead for Stamford.

There was still time for Rob Morgan to have a shot before half time but the shot was blocked by the goalkeeper.

Into the second half and Stamford continued to look for more goals and one duly arrived after fifty-three minutes. Conor Bartle met a cross from the left and he squared the ball across to Margetts who scored from close range.

Margetts nearly completed his hat-trick just after the hour mark when he met a cross from the right, but his shot struck the crossbar.

Daventry tried to find a way back into the game. When George Ball fired a shot goalwards but straight at Dan Wallis to make a comfortable save.

Stamford secured a fourth goal after seventy-nine minutes when substitute Cameron Johnson found Jack Duffy to teed the ball up for midfielder Harry Vince to score his second goal of the season.