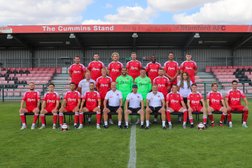 Stamford secured victory at Shepshed Dynamo moving them into the playoff places thanks to goals from Sean Wright & Jonathon Margetts.

Graham Drury started with the same starting side that beat Daventry Town. The only change on the bench was new signing Billy Bennett replacing Connor Furey who has left the club.

Stamford started strongly and the first chance was in the eighth minute when Jack Duffy held off a Shepshed defender, but the defender tackled him in the penalty area, but the referee waved away the penalty appeals.

The home side almost opened the scoring on eleven minutes when a cross from the right was deflected off a Stamford player but thankfully for the Daniels it was just wide of the goal.

Stamford created a chance on fifteen minutes when good build up play saw Jack Duffy fire a shot at goal, but Brandon Ganley was able to block the shot. Then Jonathon Margetts had a couple of efforts, first he fired a shot from long range which was wide of the goal then he met a cross from the left and his snapshot was just wide.

Stamford thought they had opened the scoring on thirty-four minutes when Margetts put the ball into the net, but it was ruled out for a foul on the goalkeeper.

As half-time approached, the major talking of the evening occurred. Joe Burgess and Jiah Medrano contested the ball with both players going in strongly. Both players were hurt in the challenge and thankfully both were able to get to their feet after treatment. The referee then decided to show both players a straight red card. Both managers were shown yellow cards for their dissent at the decision.

The second half started slowly with the sending off seemed to affect both sets of players.

The first effort of note came just after the hour mark when former Daniel John King fired a shot which was deflected over the bar at the expense of a corner. Then another former Stamford player, Jordan Smith had a shot from the edge of the area which Dan Wallis saved.

With fifteen minutes remaining, King had another shot but again he failed to test Wallis and it went wide of the goal.

The deadlock was finally broken on eighty minutes when a long throw from Connor Bartle was met by Sean Wright and his header looped into the far corner of the net.

The lead was doubled two minutes later when Margetts ran down the right and beat a couple of defenders before firing the ball into the net.