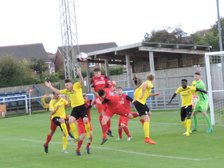 Stamford leave Shropshire with a point but it could have so easily been three. Writes Stephen Breden.

This would have been if it wasn’t for Ashley Rawlins in goal for the home side who was called into action just two minutes into the game. Jordan Smith shot, after some nice passing between Sam Hollis and Jake Duffy, but Rawlins saved well. Half way through the first half Market Drayton were to have their first chance of the game as Charlie Knowles shot well over.

Three minutes later and pre-season’s top goal scorer Jake Duffy shot from range forcing another good save out of the Market Drayton number one. Up the other end Dan Haystead was forced into action for the first time in the game as Sean Griffiths shot following a nice run but the save was comfortably made.

Just before the break Stamford should have taken the lead with a trio of chances. Firstly, a Jake Duffy free-kick was tipped over by Rawlins, then a Liam Marshall cross was met by Delroy Gordon but he headed wide. The third of these chances just before the break came to Sam Hollis after he received the ball from Jordan Smith but his shot was excellently saved by Rawlins.

A few minutes after the break some excellent defending from the home side stopped the visitors taking the lead. The ball broke the Jake Duffy in the box but his strike was deflected wide. Five minutes after this chance Joe Burgess tackled a Drayton midfielder as they tried to break away, he turned and shot over the bar. Following this chance Sam Hollis was replaced by Elliot Sandy. In the 60th minute Elliot Sandy crossed but Rob Morgan could only head over. This chance was followed by Joe Burgess being replaced by Jon Challinor.

Two minutes later and another good block by the home defence foiled a Stamford chance, Jake Duffy played a clever free-kick into Jon Challinor who had his shot blocked. Three minutes later and the ball hit the back of the net for the first goal of the game as Market Drayton’s Glynn Coney tapped in from close range but he was deemed to be offside. Two minutes later Rob Morgan had a shot blocked before the ball came to Jake Duffy whose pass ended up on target but was a simple catch for Ashley Rawlins.

Soon after this at the other end of the pitch Sean Griffiths shot from range but his strike was just over the bar. With twenty minutes to go Liam Marshall headed wide from a Jake Duffy corner. With 12 minutes to go John King replaced Jordan Smith. Two minutes later Rob Morgan headed a Jon Challinor cross just wide.