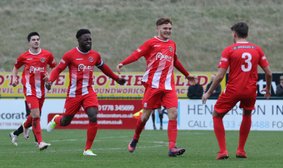 A first half Liam Adams hat-trick secures the win for the Daniels over Belper Town at the Zeeco stadium.

Belper had the first chance of the game just a minute in as Alex Steadman put a free-kick over the bar. Six minutes later and the home side had the lead, a Jake Duffy free-kick seemed to have been caught by the Belper keeper, before he collided with his own defender dropping the ball straight to Liam Adams who slotted the ball into the back of the net.

It was two, three minutes later as Liam Adams played an excellent ball through to Sam Hollis who was brought down by Belper’s Kieran Harrison, who was dismissed for the challenge, and Liam Adams placed the penalty into the bottom corner to the keeper’s left.

On the 21st minute Jake Duffy did well to keep what seemed to be a lost ball in play before crossing well to Liam Adams who was taken out from behind as he was about to finish inside the six yard area. Liam stepped up to take the penalty and completed his hat-trick, this time to the keeper’s right.

On the 30th minute Jordan Smith had a header easily saved following an Eliot Putman cross. Five minutes before the break Stamford had a double chance to make it four. The first fell to Sam Hollis as his looping header went just over following a Ben George cross. Ben George was again involved as he beat three men before laying off to Jordan Smith whose shot went over the bar.

Early into the second half the home side made two changes. The first saw Jon Challinor replace Rob Morgan and then three minutes later Pearson Mwanyongo replace Sam Hollis. Three minutes after that Pearson Mwanyongo cut inside following some nice play down the right but his shot was a comfortable save for the Belper keeper.

Following a quiet fifteen minutes Delroy Gordon very nearly made it four following a Jake Duffy corner. Two minutes later and Pearson Mwanyongo crossed from the right but it was deflected straight through to the keeper. Following this Mike Armstrong had a go from range but could only find the back of the stand. Following this Liam Adams was replaced by Bradley Fortnam-Tomlinson.