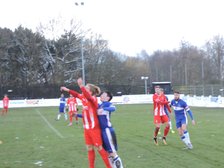 Volunteers a credit to the Scholars for allowing the game the go-ahead but Ben George and Liam Adams secure the win for the Daniels.

Chasetown had already done some incredible work before the game to clear snow from their pitch to give the game the go-ahead but unfortunately for the home side this couldn’t transfer into the game as after four minutes they were one-nil down. Bradley Fortnam-Tomlinson did excellently to beat his man and put himself in on goal before crossing to Ben George who slotted the ball past the keeper into the bottom corner.

On the 11th minute it was almost two as the ball dropped to Liam Adams but his curling shot went just wide. Ten minutes after the first the Daniels should have made it two-nil as Eliot Putman put a good cross into Bradley Fortnam-Tomlinson whose shot was spilt by Curtis Pond towards his own goal but the ball rebounded off the post.

Two minutes later and Chasetown had their first chance of the game as Muzzy Nduna blazed a shot high and wide from range. Towards the end of the half the game burst into life, first Nduna had a header from close range but couldn’t challenge Danny Haystead. Then Liam Adams was played in on goal but could only force a good save out of Pond. Up the other end Chasetown ended the half with two chances, the first fell to Muzzy Nduna but again his header didn’t challenge Haystead. Two minutes later Jack Langston shot from range but it went well wide of the goal.

At half-time Bradley Fortnam-Tomlinson was replaced by Sam Hollis. Five minutes into the second half and Danny Haystead was forced into a great save high to his left from a Will Whieldon free-kick. Three minutes later he had another chance, this time he turned Henry Eze but Ben George recovered well to make a great block. Brad Wells was then replaced by Jordan Smith.

Five minutes after the change and the Daniels doubled their lead as Liam Adams drove at the home defence before playing the ball into Jake Duffy who picked out a great cross, returning the ball to Adams who finished from close range. Two minutes later Chasetown were denied a route back into the game by a great block by Eliot Putman as Muzzy Nduna tried to finish from close range.

Three minutes later Jimmy O’Neill headed the ball from a corner and as it looped down it seemed to be going in but it just clipped the bar and then was cleared away by Ben George. Five minutes later and Haystead made another superb save, a free-kick was swung in, a Chasetown played headed the ball towards goal but Haystead was equal to it down to his left. With five minutes to go Ben George was replaced by Jon Challinor as the right back was stretchered off following a heavy challenge. Just before the game entered stoppage time a George Carter shot was blocked but bounced to Jack Langston whose header from five yards out was an easy save for Haystead.