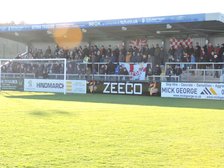 In front of their biggest crowd of the season, top-drawer efforts from Liam Adams and Rob Morgan made it 10 points from the last four games for Graham Drury's side who got the better of their manager's former club.

The Daniels are now still unbeaten at home in the league this season while this latest shut-out was their 11th clean sheet of the campaign.

Adams and Morgan will be rightly lauded for their excellent match-winning efforts, but this was a superb all-round team performance against an in-form Steelmen side.

The central defensive duo of Henry Eze and Delroy Gordon were equal to everything thrown at them while full-backs Ben George and Eliot Putman were their usual accomplished selves.

Goalkeeper Dan Haystead made a couple of crucial saves as Corby enjoyed a prolonged period of the possession in the second half while Morgan, Mike Armstrong and Jake Duffy showed an equal amount of industry and guile behind a Stamford attack that was full of willing workers.

The home side made the most of the early running and a couple of dangerous crosses caused panic in the Corby rear-guard.

It was the visitors though who went closest to breaking the deadlock as Philip Trainer rose highest at the back post from a left-wing cross, but his header went narrowly wide of the home goal.

Stamford went even closer to breaking the deadlock when a crunching tackle from man-of-the-match Morgan released Adams whose low shot hit the upright with goalkeeper Sam Wilson beaten.

Adams saw another low effort blocked after a good run from Bradley Wells had created the opening while Morgan's marauding run and shot brought out a tidy fingertip stop from Wilson.

The Steelmen were always a threat though with Jordan Crawford their liveliest attacker in the first half.

Crawford forced Haystead into a good save after a decent break forward from Connor Kennedy while Crawford rifled a fierce strike into the side-netting before Putman excelled to head a goal bound shot from Crawford off the line.

The deadlock was broken three minutes before half-time when a slick Stamford move saw Morgan win possession and find Wells whose deft pass released Adams and the on-loan Boston United frontman unleashed a cracking first-time strike that flew over Wilson and nestled in the Corby net.

Corby cranked up the pressure after the break as Eze did well to block a goal bound effort from Steven Leslie while ex-Daniels defender Paul Malone flashed a header wide from a corner.

Stamford though weathered the brief flurry of attacks and doubled their advantage with 15 minutes remaining.

Morgan brought the ball under control on the edge of the box before whipping in an excellent effort that looped over Wilson and dipped in underneath the crossbar.

Corby still threatened though and Haystead did well to deny Kennedy who had broken clear and then got a good block in to keep out a header from Jamie Anton.

Jordan Smith could have added to Stamford's tally as he burst clear on the break but, with a defender in close attendance, he blazed his shot wide.

It didn't affect the outcome though as Stamford stood firm to move back into the Evo-Stik League Division One South play-off places while closing the gap to two points on Corby who currently occupy the second promotion place.

Boss Drury said: "I thought we were dominant in the first half and did a very good job on a side who are second in the league.

"We didn't press as much in the second half, but I was comfortable that Delroy and Henry would win the long balls and we could keep hitting them on the counter attack.
"We stuck to the game-plan and the players got the job done and it's a massive three points for the football club.

"It was a difficult day for me personally because I had so many good times at Corby and I've got lots of fond memories.

"But it's football, managers move clubs and my heart is now in the red corner, so I wanted to beat the black and whites - ideally though I would like both clubs to go up."