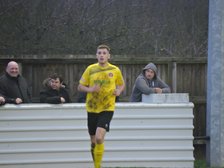 A spectacular long-range strike from Joe Boachie was enough to gain all three points at the Elgoods stadium.

Stamford had the first chance of the game when the Daniels were awarded a free-kick after a foul on Joe Boachie. Ryan Seal stepped up, but his effort was saved by former Daniel Dan Swan in the home goal.

Wisbech then had an opportunity themselves when a fierce shot was struck, and Dan Haystead did well to parry the shot and away from danger.

Isai Marselia then had an effort after being played in by Boachie but the angle was tight, and the Daniels man could not get his effort on target.

As the game approached the half hour mark, Michael Frew struck a shot that Haystead saved.

After the break, Alex Beck had effort, but his shot was wide of the goal and did not trouble the Daniels goal.

The game was short on goal mouth action as the match was played out in midfield.

With just over twenty minutes remaining across from the left was met by Boachie but his header was just wide of the Wisbech goal.

Moments later, Boachie scored the only goal of the game. He picked up the ball on the Daniels right and struck a ferocious shot from 30 yards which flew into the top right-hand corner of the goal which left Swan stranded in the home goal.

This gave the Daniels confidence as they pushed for a second goal. Midfielder Jake Sansby had an effort as time was running out, but his effort was blocked at the expense of a corner.

In injury time Boachie had another effort but his shot was wide of the goal and Stamford held on to secure all 3 points away from home for the first time since August.