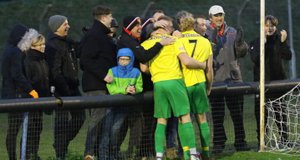 Daniels Close in on Play-Offs

Stamford stormed to their biggest away win of the season with a crushing 4-0 success at Carlton Town on Saturday.

Two goals from Rob Morgan plus strikes from Ollie Brown-Hill and Ryan Seal secured back-to-back victories for the in-form Daniels who also saw goalkeeper Dan Haystead make a crucial penalty save for the second consecutive week.

Graham Drury's charges have lost just once in their last eight Evo-Stik League Division One East games with Saturday's success their fifth win of that sequence.

It was also their sixth clean sheet in eight games after a hitting a rich vein of form which has taken them within two points of the play-offs ahead the trip to fifth-placed Sheffield FC next weekend.

Stamford, who were missing attacker Joe Boachie due to a hamstring injury, handed a first start to the season to striker John Sands who successfully completed another 45 minutes on his road back to full fitness.

Sands and Brown-Hill had combined to give Stamford a vital lead in last Saturday's home success over Lincoln United and the duo were at it again as the Daniels took just seven minutes to break the deadlock.

Jake Duffy's astute through ball released Sands whose low shot struck the post and, after Seal had his seen his rebound saved by Carlton custodian Jack Steggles, Brown-Hill pounced to fire home the follow-up and put Stamford ahead.

It was just reward for a stirring Stamford start as the Daniels looked full of enthusiasm and energy as they looked to gain revenge for a 2-0 home defeat by the Millers back in October.

Seal had a shout for a penalty turned down after a strong run into the box before Stamford doubled their lead after 24 minutes.

Seal's cross from the left saw Morgan rise highest and flick his backward header goalwards as it looped over the stranded Steggles.

Sands saw a first-time shot from a Brown-Hill assist bring a solid save out of Steggles while Duffy headed narrowly wide from a Morgan cross as Stamford dominated large parts of the first period.

Carlton made two changes at the interval and attempted to make the most of swirling wind and rain to pepper the Stamford goal.

Kerian Walker's huge long throws were strongly defended by a solid Daniels back-line which included Kern Miller who stood tall for every high ball despite having an operation to re-set a broken nose - sustained in the Wisbech game - just a couple of days ago.

Miller made a good block to deny a goalbound shot from Kyle Stovell as Stamford continued to put their bodies on the line as Carlton forced a series of corners.

The hosts looked like they had finally found a breakthrough when Jake Duffy committed a foul in the box just nine minutes into the second period.

However, Haystead was equal to the spot kick with his second successive penalty save as he dived low to his right to cling onto Tyler Blake's effort.

It took the sting out of Carlton's early second half resurgence and Stamford's crucial third goal followed just after the hour mark.

Steggles could only punch a Duffy free-kick straight out to Miller and, although the goalkeeper saved the centre-half's shot, Morgan was on hand again to sweep home the rebound.

The win was wrapped up with nine minutes remaining as Isai Marselia - the half-time replacement for Sands - sent Seal clean through with a fine pass and he continued his scoring spree with another clinical finish.

Stamford, despite their four-goal cushion, kept going in the dying throes with more defiant defence denying Carlton a consolation.

Haystead made another fine save to thwart Connor Bartle who had burst clear before Marselia had effort saved by Steggles with substitute Christian Eneremadu hitting the rebound narrowly over as Stamford finished the game, like they had started, in control.