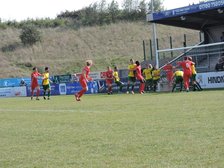 The Daniels were denied a winning home finale after sharing the spoils in a goalless draw with Wisbech Town on Easter Monday in front of their biggest Evo-Stik League crowd of the season.

Clear-cut chances were at a premium in a close contest with Wisbech pocketing the point they needed to retain their place at Step Four of the non-league pyramid for next season.

Daniels manager Graham Drury admitted the match had a real 'end of season' feel about it after seeing his side keep a second successive clean sheet following Saturday's 4-0 away win at demoted AFC Mansfield.

Gregg Smith started a second consecutive match at centre-back before being pushed forward after the break while Stamford Under 18s youngster Will Palmer made his first team debut as a second half substitute.

Drury said: "There were a few chances at the end where we should have shot but we've tried to walk it in.

"But I don't think either goalkeeper has been really threatened. It was a typical end of season affair.

"They were happy with the draw because it kept them up while two clean sheets on the trot is a bonus for us.

"Gregg's done well at centre-half in both those games, but I thought we needed to get hold of it a bit more up front in the second half so I made the change.

"It was also nice to get young Will on. He's had a good 25 minutes and it's always nice to do that.

"It was a shame we didn't score for the fans at the end because it was a good crowd, but it was very hot out there and all the energy levels were low."

Stamford were missing skipper Jake Duffy, who was sidelined with a calf injury, while the Fenmen included a number of ex-Daniels in their line-up, including Conor Marshall and Jack Gurney who have both featured at the Zeeco Stadium this season.

The visitors created the better openings in the early exchanges with Dylan Edge seeing a cross-come-shot drift wide of the back post before the Fenmen forward robbed Dan Haystead and teed up Gurney who lifted a difficult chance over a gaping goal.

Smith saw a header safely dealt with by former Ketton custodian Dan Swan in the Wisbech goal before Joe Boachie saw a mazy run and shot end with the visiting number one making a routine diving save.

Boachie produced another fine run and this time lifted his shot over the advancing Swan, but the ball drifted away from goal and allowed Wisbech to clear and ensure the first half finished goalless.

Ryan Seal and Teddy Bloor - who were both carrying knocks - were replaced at half-time as Stamford made a double substitution by bringing on Ollie Brown-Hill and Mike Armstrong.

Armstrong was in the right place to clear a Jon Fairweather effort off the line following a Wisbech corner which the Fenmen had forced after Jack Keeble had seen a goalbound effort hooked away by Rob Morgan.

Stamford mounted a series of late raids to try and force a breakthrough but, despite several goalmouth scrambles, the Fenmen defended resolutely to keep their first clean sheet in 24 league games.

The stalemate leaves Stamford in 11th place ahead of Saturday's final Division One East match at Cleethorpes.

They will again be without the injured Duffy while Armstrong will not feature as he is running the London Marathon on Sunday.

Drury added: "It will be a tough game. Cleethorpes will want to finish strongly, but we will also want to go there and end with a win."