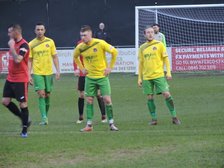 Two goals from Declan Bacon who is on loan from Alfreton Town was the difference between the two teams.

The first chance of the game was after eight minutes when Bacon had a shot, but his effort was easily saved by Dan Haystead in the Daniels goal.

John Sands had the first chance for Stamford on fifteen minutes, but his shot did not trouble former Daniels keeper Jonathan Hedge in the Sheffield goal.

Midway through the first half the home side were forced into a change when left back Ben Turner was forced off with a leg injury.

Sheffield had an excellent chance to open the scoring when Marc Newsham found space on the edge on the box and forced Dan Haystead into making a full length save to keep out the Sheffield forward.

Less than a minute later, the home side took the lead when James Gregory passed to Bacon and he slotted the ball past Haystead.

Conceding their first goal in three matches prompted Stamford to press for an equaliser. First, Ryan Seal had a chance after breaking free of the Sheffield back line. He fired a shot across goal which Hedge palmed away at the expense of a corner. From the resultant set piece, Sands had a close-range effort blocked by the Sheffield defence.

In the second half, Stamford started brightly, and Ollie Brown-Hill went close, but his effort was blocked.

Sheffield got their second a couple of minutes later when hesitation in the Daniels defence saw Newsham feed Bacon and for him to grab his and Sheffield’s second.

On 55 minutes, the home side were reduced to 10 men when Daz Winter was shown a straight red for a foul on Brown-Hill.

Stamford continued to look for a way through the Sheffield back line, but chances were at a premium. Brown-Hill did break through with twenty minutes remaining, but his shot beat Hedge but cannoned off the post.

Despite the result, Stamford are still only three points of the play-off places with fifteen games still to go.