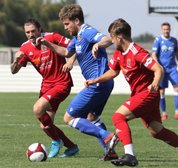 Stamford are setting the early pace at the top of the BetVictor Northern Premier League South East Division after maintaining their winning start with a 2-0 victory at Wisbech Town on Bank Holiday Monday.

Goals from Harry Vince and James Blunden secured a third successive league win for the Daniels and a fourth in all competitions following Saturday's FA Cup victory at Wroxham.

They are one of just three teams - Carlton Town and Leek Town being the others - who still have a 100 per cent league record.

Monday's victory also saw the Daniels keep a second successive away clean sheet in the league after grinding out the win in similar fashion to their opening day triumph at Glossop North End.

Manager Graham Drury said: "We haven't really played well in the last two games away from home, but we've ground out clean sheets and wins.

"If we can smash teams at home on our pitch and grind out results away and keep clean sheets then we'll have half a chance.

"We've got nine points out of nine, we're through to the next round of the FA Cup so it's been a good weekend for us really.

"We've scored six goals in two games and our clean sheet column in the league is looking alright.

"The conditions were very hot and you have to give a lot of credit to the squad because that return is all that you can ask for.

"It's all positive from us. We've got belief in the changing room that we can grind out wins as well as winning games by playing good football.

"I'm over the moon with the start we've had. Wisbech made it hard for us by playing 4-5-1 which didn't leave a lot of space for us to get in behind.

"They gave us a lot of credit. They watched us on Tuesday and perhaps thought if they opened up then they would get popped off.

"We had to do a professional job and we have done that. We've won 1-0 here last season and then 2-0 this season so it's an improvement.

"Everything is positive and improving and all credit to the players in the changing room - we're buzzing at the minute."

Stamford were able to field an unchanged starting line-up for the fourth successive game and made the most of the early running.

They broke the deadlock in the 20th minute when Cosmos Matwasa's surge into the penalty box was brought to a halt by a clumsy challenge.

After missing two penalties in their final pre-season game, Vince took on the spot kick taking duties and placed his shot beyond the diving Dan Farrell in the home goal.

Stamford continued in their search for a second goal with Matwasa dragging a shot wide after a swift move involving Vince and Morgan before Tendai Chitiza headed wide from a Vince free-kick.

Joel Earps fired into the side-netting from an acute angle for the hosts before Vince went close to doubling the Daniels' lead with an audacious overhead kick which flew narrowly wide of the home goal.

Without the cushion of a second goal, Wisbech came out for the second half with renewed vigour and Phil Bilson saw a curling shot from an enterprising attack safely held by Dan Haystead.

Aaron Hart then cleared off the line to deny the Daniels in a goalmouth scramble before the Fenmen narrowly failed to get a touch on a downward knock-down in the six-yard box following a free-kick.

Jon Challinor lashed a shot into the home side-netting after linking well with Chitiza while Sean Wright had to make a crucial block at the other end as Earps threatened the Stamford goal.

Substitute Dec O'Hare added another attacking impetus to the Daniels and he fed Chitiza who teed up Pearson Mwanyongo to send in a curling shot which was safely gathered by Farrell.

Stamford then secured their hat-trick of league wins with five minutes remaining as centre-half James Blunden opened his goalscoring account for the club.

A short corner was worked between Mwanyongo and Vince whose centre was met by Blunden who guided his header into the bottom corner of the Wisbech net and continue Stamford's fantastic start to the new season.