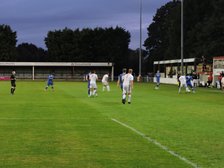 Goals from Tendai Chitiza, Tom Siddons and James Blunden - against his former club - ensured the Daniels bounced back after the setback of losing for the first time this season at the weekend.

Manager Graham Drury was delighted with how his side stood up to a physical and direct Lincoln side who were awarded two penalties and hit the woodwork three times in a feisty derby duel.

Drury said: “It was difficult because, when teams are booming it, it’s hard to get into your rhythm and that really affected us.

“We tried to play when we could, but we just couldn’t get drawn into it.

“We scored some good goals, but credit to them. Dan’s made a great save from the first penalty and I thought he was outstanding.

“They’ve hit the post a couple of times, but they’re always going to cause problems just by throwing Matt Wilson up there and launching it.

“It’s not football for me. I don’t like it. It might be a way to win and some managers prefer to do that but, if I’m being brutally honest, I wouldn’t want to pay to watch it.

“We’ve come out of a real scrappy game and scored three goals away from home again. It’s our third away win in the league so I’m chuffed to bits with that.

“We had to bounce back hook or crook from Saturday. Good sides do that and go on another run of three or four games. That’s what we’ve got to look to do.

“We don’t want teams getting away from us in the table if we can help it so credit to the lads again because they’ve had to dig in. It was a real battle, a real fight.

“The centre-halves have stood up tall, Blunden’s got another goal which is fantastic while Tendai and Siddons have both scored again.

“We had to really stand up and be counted and I think we did that.”

Drury was forced to change his starting line-up for the first time this season when a knee injury ruled out midfielder Harry Vince.

Cleveland Taylor moved into the centre of the park with the returning Jordon Cooke handed a first start at right-back.

Lincoln struck the upright for the first time in the opening exchanges of the contest when Wilson turned a low Jack Wightwick cross against the post.

The hosts then found themselves behind on the 15-minute mark when Chitiza stepped up to crack home a 25-yard free-kick into the bottom corner of the Lincoln net.

Wilson had another decent opening, but his close range header was safely gathered by Haystead before the Daniels doubled their lead just after the half-hour mark.

Cooke made a fine burst down the right and his low cross was turned goalwards by striker James Hicks whose effort was blocked by home goalkeeper Ollie Battersby with Siddons pouncing on the rebound to score for the second successive game.

This sparked a strong spell of Lincoln pressure which led to the Whites being awarded two penalties in quick succession.

After Mark Gray had sent a speculative overhead kick crashing against the Stamford crossbar, Cooke was penalised for a foul for their first spot kick.

However, Haystead came to Stamford’s rescue with a smart stop to keep out Noel Burdett’s low penalty.

But the Daniels custodian was then powerless to prevent Wilson's thumping spot kick shortly after when the Whites were awarded a second penalty following a hand-ball from Blunden.

Blunden though made amends in the second half when he smashed home from close range following a corner to restore Stamford's two-goal advantage in the 51st minute.

Chances came and went at both ends with Hicks’ search for a first league goal again proving elusive after he was denied by a brilliant block from Gray.

Haystead again excelled in the Stamford goal with a magnificent reaction save to block a Wilson effort at the back post before Battersby denied Siddons from close range at the other end.

Despite Lincoln hitting the upright for a third time when former Stamford player Wightwick fizzed a low drive against the post, their hopes of a comeback were ended late on when Wilson was sent off after collecting his second caution of the game.

The victory was Stamford's third successive away win and a fourth triumph from five league games.