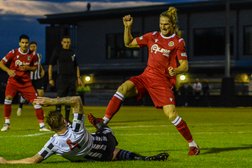 The defeat dropped the Daniels down to fifth place in the BetVictor Northern Premier League South East Division as their triumphant visitors surged into second spot.

Manager Graham Drury was full of praise for the performance of the Millers who quelled Stamford's attacking threat.

Drury felt some of his side's attacking play was 'electrifying' - but unfortunately Stamford failed to ignite their goalscoring spark as Carlton dimmed the Daniels' lights.

Drury said: "I have to give total credit to Carlton.

"We've made two poor errors and given them the lead. We can't afford to do that, especially at home. That's not us.

"But they've punished us so they've been better than us in the final third.

"We've had 75 per cent of possession, but that doesn't win you games.

"Carlton deserved the win. They've put their bodies on the line and got all the blocks in.

"They might have got a bit of luck at times, but you earn your right for luck and they've punished us when they've broken away.

"They've come here and done a real job on us.

"Some of the football we played was electric with the switch of play, but we couldn't break them down and sometimes you have to give credit to the opposition and I'm going to give them total credit.

"We were relentless and I thought they would drop off. I didn't think they would be able to keep with that but, credit to them, because they did. They stayed with it.

"We were electric going forward, but we just couldn't find that final break."

Stamford made just one change from the side which had beaten Witham in Saturday's FA Cup tie with the fit-again James Blunden replacing an injured Mike Armstrong.

That saw Jack Keeble switched to left-back with Jon Challinor moving to midfield in a side which was missing defender Sean Wright plus strikers James Hicks and Tom Siddons as well as the suspended Harry Vince.

Carlton took an early lead when the unmarked Luke Smithson steamed in at the back post to slot home an Aaron Okupu cross past Dan Haystead after nine minutes of the match.

Stamford then enjoyed the bulk of possession for the remainder of the half but the final ball proved elusive.

Pearson Mwanyongo fired a shot just over while Rob Morgan clipped an effort just wide of the far post.

Morgan then headed over from a Cleveland Taylor free-kick before Tendai Chitiza's shot was high after a strong surge forward.

The Millers doubled their lead seven minutes before half-time after Jordon Cooke had made a crucial block to deny one-time Stamford transfer target Okuku.

From the resulting corner the ball fell to Toby Moore after a scramble and he fired home despite the efforts of Taylor on the line.

Stamford made two changes at half-time by bringing on Ollie Brown-Hill and Dec O'Hare to boost their attacking options.

And, although that increased their impetus going forward, they were unable to breach a well-organised visiting side who are managed by ex-Stamford boss Tommy Brookbanks who missed the match through illness.

It needed an excellent save from Haystead early in the second half to prevent Opuku from adding a third for the Millers before Carlton custodian Jack Steggles shone at the other end.

Steggles made a fine stop to claw away Morgan's curling effort before safely holding onto a low drive from Chitiza.

Chitiza then rattled the Carlton crossbar with a deflected strike before Brown-Hill just failed to connect with a cross from Stamford's third substitute Liam Adams.

The visitors then wrapped up the win in the dying throes as Tyler Blake took advantage of the gaps at the back as Stamford pushed forward to fire home past Haystead.