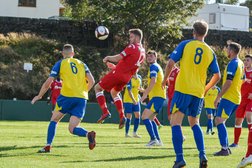 Stamford secured a point away at Stocksbridge Park Steel thanks to a late goal from Sean Wright.

The match saw Ollie Brown-Hill start his first game of the season in place of James Blunden who missed the game through injury.

The home started and almost opened the scoring in the opening minutes when Scott Ruthven’s shot clipped the post before being cleared by the Daniels defence. Stocksbridge were well on top in the early stages with Luke Mangham having a chance to score but his effort was just wide of the goal.

Stocksbridge thought they had scored after 15 minutes but the referee disallowed the goal for a foul. Stamford were then denied a goal when Brown-Hill’s effort was ruled out for off-side.

The home side finally took the lead on 25 minutes when the Daniels back line failed to clear the ball and Mangham was on hand to score his 10th goal of the season.

Stamford looked to bounce back and Cosmos Matwasa fed the ball through to Rob Morgan, but the Daniels midfielder was in an offside position.

Stocksbridge almost doubled their lead just before half time when Lee Thompson strode forward and struck a fierce shot from distance that Dan Haystead did well to parry away at the expense of a corner.

At the start of the second half, the Daniels had a chance to level the scoring when Pearson Mwanyongo had an effort saved by Jacob Carney in the Stocksbridge goal. Carney is currently on loan at the Yorkshire club from Manchester United.

A quick break away from Brown-Hill found Tendai Chitiza he squared for Matwasa but the Daniels player could not get the ball out of his feet to get a shot away.

On the hour mark, Stocksbridge nearly scored a second when Ruthven met a Kane Swinburn free kick, but his effort cannoned off the post and away from danger.

Mwanyongo almost scored Stamford soon after as he cut in from the right and Carney had to be at full stretch to tip the ball.

Stamford were now creating chances and the pressure finally told on 85 minutes when a corner was played short to Mwanyongo and his pinpoint cross was met by Sean Wright at the far post to score his first goal for Stamford since returning to the club in the summer.