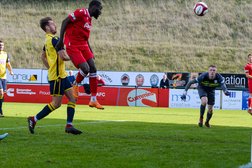 Stamford completed a hat-trick of five-goal hauls to move back into the BetVictor Northern Premier League South East Division play-off places with a comprehensive victory over Frickley Athletic on Saturday.

They are now up to fifth in the league table and Drury wants his side to be even more clinical after five-star displays against Worksop, Loughborough Dynamo and now Frickley.

He said: "I'm absolutely delighted, but I do think we should have been more clinical.

"I had a real go at them at half-time because I felt we slowed the game down when we was in good areas.

"We have got to be a bit more ruthless, but what manager wouldn't be happy about scoring 15 goals in three games and only conceding two.

"Some of the play is good to watch. We look strong, big and pacey.

"Spencer Fearn (Frickley's sporting director) said it was the best side he's seen this year and the majority of last but you're only as good as your last result.

"We've got to keep going and keep ticking over. I've given the lads real challenges and they keep coming through these tests with flying colours which is great.

"We're really enjoying what we're doing at the moment and that's what football is about when you're winning.

"It's been a joy to work with what's in our changing room and all credit to them. They've been a fantastic group from the moment they've walked in.

"I've got players all over getting minutes because they all want to be a part of it which makes it a really difficult job.

"But, when you're getting results like we have, they understand that they can't get in and have to wait their time.

"They're so together and everybody is right behind each other. There's lot of desire.

"We've just got to keep doing the right things and I can't let them get carried away."

Stamford were unchanged from last week's FA Trophy triumph for the visit of a Frickley side who had won their last three league games while keeping clean sheets in each of the victories.

But the Yorkshire visitors were unable to contain a rampant Stamford side in the opening period as the Daniels scored twice in the first 15 minutes.

Jacob Hazel had twice gone close for Frickley in the opening exchanges after he had first outpaced Jordon Cooke only for his low shot to be smothered by Dan Haystead while another effort was deflected wide after the prolific frontman had showed good skill to create the opening.

Frickley goalkeeper Tom Jackson was down smartly to turn away a Siddons strike before saving his side again after Chitiza's pass had set Harry Vince free on goal.

Vince then provided the cross for Stamford to take a 13th minute lead from the resultant corner.

His quickly-taken flag kick was returned to the Stamford midfielder and his back post cross picked out Siddons to head home.

The in-form Siddons then doubled the Daniels lead two minutes later with a classy finish to convert Chitiza's cross with a deft volley.

Stamford continued to show all the attacking intent with Jackson regularly being called into action.

He made a fine one-handed stop to turn away a stinging shot from Morgan before tipping over Siddons' terrific turn and shot.

Jonny Margetts just failed to connect fully with a Tyler Williams cross at the other end before Michael Hollingsworth hit the visitors' best chance of the first half over the bar from his volley after Hazel's cross had been palmed into his path.

Stamford could have added a third goal before the break, but Chitiza and James Hicks both got in each other's way with the goal at their mercy.

However, it took them just two minutes of the second period to extend their advantage as Chitiza headed home from close range after Siddons’ shot had smashed against the underside of the crossbar.

A fourth goal followed after 53 minutes when James Blunden played in the marauding Chitiza who slipped his shot confidently past the advancing Jackson.

Frickley did reduce the arrears after 65 minutes when Hazel picked himself up after being fouled on the edge of the box to rifle home the resultant free-kick into the bottom corner of the Stamford net.

But Stamford only needed another three minutes to restore their four-goal advantage as Chitiza’s pass was dummied by James Hicks for the on-rushing Morgan to power home their fifth of the afternoon.

They could have added more to the scoreline with substitutes Dec O’Hare, Pearson Mwanyongo and Ollie Brown-Hill threatening after their introduction.

Hazel and Margetts also had late openings for Frickley which failed to come to fruition as Stamford comfortably secured the spoils with one of their strongest performances of the season.