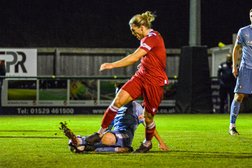 Honours Even With Tigers

The honours finished even as two of the Northern Premier League South East Division heavyweights traded blows in a cracking clash at the Zeeco Stadium on Tuesday night.

The goalless stalemate ensured that Stamford still remain unbeaten over 90 minutes this season after extending that sequence to 10 games against a Tigers side who, on this showing, will be among the front-runners with the Daniels this season.

The game - played in front of an excellent midweek attendance of 377 - was a complete contrast in footballing styles.

Stamford were rapid raiders with their slick passing game creating some good opportunities while Worksop's direct approach saw the Daniels show the other side to their game.

Their back four and goalkeeper had to stay strong against the constant aerial bombardment to keep another clean sheet which sees Stamford with the joint best defensive record in the South East Division.

They were boosted by the returning quartet of James Blunden, Tendai Chitiza, Rob Morgan and Cosmos Matwasa to their starting line-up following Saturday's FA Trophy triumph over Lincoln United.

However, skipper Sean Wright missed out through injury with goalkeeper Dan Haystead taking the captain's armband.

The two sides started the contest at a pulsating pace and both could have taken the lead inside the opening minutes.

James Hicks was teed up first by Chitiza but, after skillfully creating space in the box, he was closed down by goalkeeper Seb Malkowski who grabbed his low shot.

Worksop responded instantly and the first of many huge hits into the Stamford penalty area landed invitingly at the feet of Gavin Allott but the former Frickley frontman - so often the Daniels' nemesis in the past - failed to trouble Haystead with his effort.

Allott flashed another first-time shot wide before Stamford created their best chance of the first period.

Connor Bartle's long throw set Hicks free but his goalbound effort was superbly tipped onto the bar and over by Malkowski.

Morgan flashed a shot over after a tidy lay-off from Tom Siddons while Hicks went close with an effort aimed at the far post after a fine turn and shot.

Worksop's best opportunity of the first period saw Allott rise highest to meet a cross at the back post but Haystead, at point blank range, magnificently somehow managed to claw the ball over the bar.

The Tigers then needed to produce their own defensive heroics to prevent Stamford from going ahead.

Hicks' classy step-over allowed the ball to run into Morgan's path but, as he burst into the box preparing to shoot, James Baxendale produced a brilliant last-ditch challenge to ensure the half finished goalless.

Stamford started the second half on the front foot as Matwasa fired an early effort over before his jinking run and cross brought a crucial headed clearance from Jack Greenhough.

Jordon Cooke then headed just over from Bartle's inswinging free-kick.

Both sides had a long throw to add to their attacking artillery and Stamford were forced to scramble clear on a couple occasions while Chitiza fired wide at the other end after Bartle's launch into the box.

The Stamford full-back blasted a couple more efforts wide as both sides sought a winner as the match entered the final 20 minutes.

However, both defences continued to stand firm with chances at a premium as the match entered the latter stages.

Stamford forced four successive corners as the match moved into injury-time but the visiting defence kept the Daniels at bay to ensure the spoils were shared.