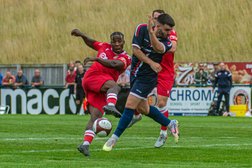 Stamford began life in the new Midlands division of the Northern Premier League with a defeat to Ilkeston Town.

There was a debut for goalkeeper Dan Wallis who joined Stamford earlier in the week. He replaced Max Peverell who was on the bench. There was also starts for James Hicks and Mike Armstrong with them replacing Joe Butterworth and Rodrigo Goncalves.

The first chance of the game fell to our visitor when Alex Troke found Zak Goodson he held off James Blunden but dragged his shot wide of the goal. Both sides were having trouble creating any clear-cut chances in the first half and neither keeper was forced into making a save.

This changed towards the end of the first half, when a cross from the right was not cleared by the Daniels defence and Billy Bennett was on hand to score.

Stamford looked to respond and a cross from Connor Bartle was just side of the far post with the goalkeeper scrambling.

At the start of the second half a cross from the left was headed by Cosmos Matwasa towards Cameron Johnson but the Daniels frontman was unable to connect with the ball.

As the hour mark approached the Daniels had a corner which was met by Tom Siddons, but his effort was headed off the line.

A few minutes later and Ilkeston doubled their advantage. This was goal was almost a carbon copy of the first as Troke crossed the ball from the right and he found Bennett unmarked for his to head home.

Stamford looked to respond and a cross from Bartle found Siddons but his header was wide of the goal. Then Matwasa burst into the penalty area and he tried to find Jon Challinor but the cross was cleared for a corner. The resultant corner was swung in and again Siddons effort was blocked on the line.

With 15 minutes remaining, a cross from the right fell to James Blunden and the defender had time to poke the ball goalwards but Ross Durrant in the visiting goal pulled off a good save.

On 80 minutes, the visitors got a third. Charlie Wakefield lifted the ball forwards, and it was taken down by Troke who then lifted the ball over Wallis in the Daniels goal. They almost had a fourth when Wakefield had a shot which was blocked by Wallis.

Stamford grabbed a consolation goal in injury time when Bartle crossed from the left and the ball found its way to Challinor who slotted the ball past Durrant at the near post.