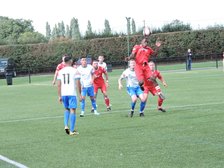 Another Win On The Road

Stamford continued their fine form this season as they recorded their fourth consecutive away win this season.

Manager Graham Drury was able to announce an unchanged starting eleven for the first time this season. The returning Jake Duffy was able to take his place on the bench.

Coleshill came into the game in great form having won all four of the opening league and cup games.

Stamford started well and in the early minutes Cosmos Matwasa cut in on the right and fired a shot across goal which Paul Hathaway in the home goal had to palm away for a corner.

The opening goal came after eight minutes when a cross from the right was headed back by Sean Wright across goal. The ball came out to Stacey Freeman to fire home from 12 yards to score his first goal for the Daniels.

A few minutes later Jack Duffy fired a shot towards goal, but his effort was over the bar.

The Daniels doubled their lead on twenty-five minutes when Cameron Johnson cut in from the left and unleashed a shot into the top right-hand corner of the goal.

The home side were limited to the chances thanks to a well marshalled Daniels back line. Their only shot of the half came after 40 minutes when Sam Moore fired a shot wide.

Moore was involved again just before half time but for completely different reasons. Harry Vince was fouled, and the ensuing melee saw Moore receive a straight red from the referee. Jack Duffy and Josh Willis were shown yellows for their parts in the altercation.

Coleshill continued to look for a way back into the game, but they could register an effort to trouble Dan Wallis.

The Daniels seemed to take their foot off the gas in the second half but still had opportunities to increase the score. Substitute Tom Siddons had two great chances to score, first he was played in by Rodrigo Goncalves and Siddons efforts was saved by the keeper before again see his effort saved by Hathaway after being put in the clear by Matwasa.